“For me, the most important thing is that tomorrow on the pitch the play is good. We need to turn draws into victories. Winning games changes everything and by full-time tomorrow we could all be here smiling. It could actually be good for us that a big team is coming here to play.” – Pepe Mel on facing United.

“The most important thing that day was the way the team played as a collective, which allowed individual players to come out and perform to such high standards. We shouldn’t forget that – the way the team played is what got us the result – and it would be good if we can put in the same performance at home and ensure we get the result.“ – Morgan Amalfitano on the 2-1 win at Old Trafford.

“We need to get back to creating more opportunities than we have done. We’ve played quite well in games but not scored and taken our chances. I think the key is to improve all things.” – David Moyes sums things up.

“Tom Cleverley is a fantastic young player who is developing all the time. He’s a great trainer here, someone who is the first out every day. He does his best in training and never gives it less than 100 per cent. From my point of view, that is why Tom will be successful.” – Moyes on Tom Cleverley. 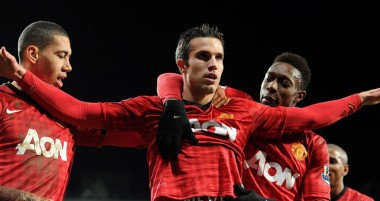 The 43-year-old official has overseen 17 Premier League matches this season, brandishing 59 yellow cards and 2 red cards. He has awarded 6 penalties. Was last seen by United fans during the 2-0 home win over Crystal Palace back in September.

Wayne Rooney has struck 6 goals in his last 5 starts against The Baggies.

West Brom have kept only 5 Premier League clean sheets all season – only Fulham (20th) have a worse record.

The Baggies have drawn 13 matches in the Premier League so far this season – a divisional high.

United have not lost a Premier League match this season where they have scored the first goal (W13 D3).

United have lost the most points (7) from goals conceded in the final 10 minutes of matches in the Premier League this season.

West Brom have won just 1 of their last 18 matches in all competitions.

United have not lost a league game at The Hawthorns since 1984.

Love United but hate Moyes? If you feel that he hasn’t lived up to expectation and you want to see a new manager at the club please SIGN AND SHARE this petition now!

no you dont love the united that fergie built, unless you would stand behind Fergie’s last words. your comment is a disgrace