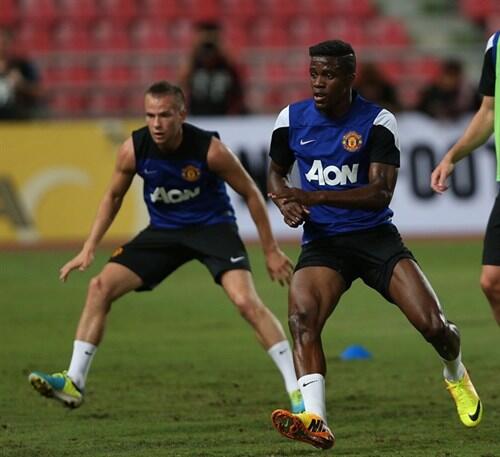 Manchester United manager David Moyes: “… it will take a little bit of time to get used to each other but that’s what the games are for. We’ll try and give as many people as we can an opportunity to play. We’ll see some young players as well.”

Anders Lindegaard is likely to start in goal, with a mixture of youth and experience filling the rest of the side. With Robin van Persie, Javier Hernandez and Wayne Rooney not in the squad (for varying reasons), Danny Welbeck should start on his own up front. Other than that, starting berths are likely to be determined by levels of fitness at this early stage of pre-season, with some players in better shape than others at this point.

The side will be made up of a selection of players from the Thai Premier League (TPL). Clubs are currently just over halfway through their league season, with a slight hiatus for this match and another vs Chelsea in a few days time. They will be managed by Dr. Vichit Yamboonruang – the director of the TPL. The Dr. will be assisted by former Thailand international striker Piyapong Pue-on. (More on him later.)

The All Star XI play an annual exhibition match. Previous results include:

While technically a friendly, the match is being billed as the 2013 Singha 80th Anniversary Cup.

Neither of the TPL’s top scorers, Buriram United duo Carmelo (15 in 16) and Javier Patino (11 in 14), look set to feature.
Singha All Star XI assistant manager, Piyapong Pue-on, appeared in the 2004 film, Kerd ma lui (Born to Fight). He is also an active Thai Air Force officer. It sounds as though he is not to be messed with.

Score prediction (for what it’s worth): Singha All Star XI 1-1 Manchester United

Streaming links to watch Singha All Star XI vs Manchester United live online will be live on http://manutdstreams.com

It has got to be about 3 or 4 and a consolation goal for the hosts, Zaha to start with a bang.

man united z beta team….and they will this one by 4-1

I can’t predict d score…but it can be win or draw or lose.

Woah! Thatz gonna be fantastic to watch… We gonna beat them up… 5-0

I wish man u the best