UEFA Champions League, Round of 16 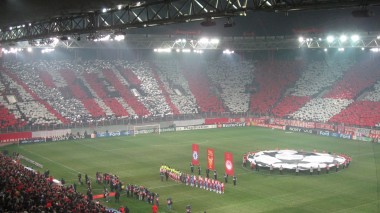 “We know there’s lots at stake for Manchester United in this match. We know Manchester United are not allowed to make any mistakes due to their position in the Premier League and we have to say probably this kind of situation may weigh too much on their players’ shoulders. It could be an incentive to them or it could be a burden on their shoulders.” – Michel (Olympiacos manager).

“Olympiacos did very well against PSG and Benfica. They came through a difficult group, they have a great home record here. We know it will be a difficult night. They have a big support. It’s far from an easy match.”– David Moyes.

“When you get to this stage in the competition you can’t afford any slip-ups or you’re out. The away leg is very important – we need to get a good result there.” – Shinji Kagawa.

The 40-year-old official has taken charge of 2 Champions League matches this season, brandishing 4 yellow cards. Last seen by United fans during the 2-0 win over Ajax in the Reds’ ill-fated 2011/12 Europa League campaign.

Should he feature, Ryan Giggs will make a 150th European Cup appearance for Manchester United.

Nemanja Vidic looks set to make a 50th appearance in the Champions League for Manchester United.

United are on a run of four consecutive clean sheets in this season’s UEFA Champions League.

Olympiacos have won 6 of their last 8 home matches in the Champions League, scoring in all of them.

Olympiacos are unbeaten at home in their last 5 matches against English opposition.

Ryan Giggs scored twice in a 4-0 United romp over Olympiacos back in October, 2002 – the last time an English club won away to Olympiacos.

United are one of only three sides still unbeaten in this season’s competiton (Atletico Madrid and Real Madrid).

United are also one of three teams (Atletico Madrid and Chelsea) with the best defensive record, having conceded only 3 goals.

Darmian wins Player of the Month

Matteo has won Manchester United’s, fan voted, player of the month. The new Italian right back has been very impressive in his first month as a Red Devil. After keeping 4 clean sheets in 6 […]

Manchester United haven’t scored in 2 consecutive games, but this is not a new problem. All season the attack has looked a lot weaker than in previous campaigns. United sit 4th in the Premier League […]

Sir Alex Ferguson stressed on Thursday that he did not feel that Wayne Rooney would be well enough to travel down to London this weekend to face Queen Park Rangers at Loftus Road, but pictures […]