Campo Retro have a wide range of Manchester United retro shirts available as well as the 1999 Champions League Final shirt which we are giving away – United shirts ranging from 1957-1999, not only that, but Campo will print any name and number you want on the back of the shirt to make it extra special.

RedMancunian is delighted to bring you the opportunity to win a retro Manchester United shirt from 1999, with Solskjær 20 on the back.

This competition is open to entrances from all over the world, so don’t worry if you live in Indonesia, you still have a fantastic chance to win this fantastic prize.

It couldn’t be simpler to enter this competition, all you have to do is answer the questions below, which is; What was the score in the 1999 Champions League Final? Simple.

Competition closes on Friday 25th October 2013, the winner will be announced soon after and receive an email from Campo to request information on shirt size and delivery address. 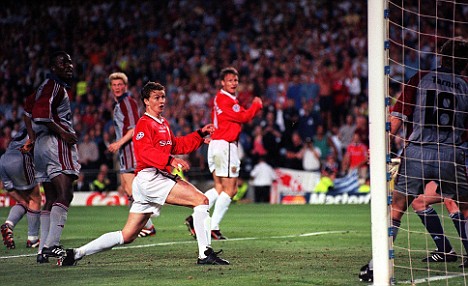 David Moyes will be very pleased after the weekends result against Fulham, the first half was a exactly the type of performance Moyes has been looking for since he took over at Old Trafford. The […]

Manchester United make their first signing of the summer

Manchester United have made their first signing of the summer, snapping up Serbian under-17 international goalkeeper Vanja Milinković from FK Vojvodina. In a statement released on Saturday morning, Manchester United confirmed that both club had come […]

CONFIRMED: Manchester United complete their 3rd signing of the summer