The second-highest goalscorer of 2016/17, Romelu Lukaku, is finally a Manchester United player – a ‘Red Devil’ at both club and international level. Although the Belgian international’s move from Goodison always appeared inevitable, Old Trafford is something of a surprise destination. With a touted return to Old Trafford for Cristiano Ronaldo becoming an ever-more remote prospect, United have an equally capable acquisition in Lukaku.

Manchester United manager Jose Mourinho is, of course, the man who considered Lukaku surplus to requirements at Chelsea in 2013. The subsequent loan move to Everton was a huge success for Lukaku, resulting in his permanent departure from Stamford Bridge ahead of the following season. In joining Manchester United from Everton, Lukaku holds common ground with Wayne Rooney – who, ironically, has now gone the opposite way after making the same journey across the M62 thirteen years ago. However, the diamond from Antwerp has another element in common with the Croxteth combater: he too was a man before he was a boy and lit up his national league as a teenager, with RSC Anderlecht. 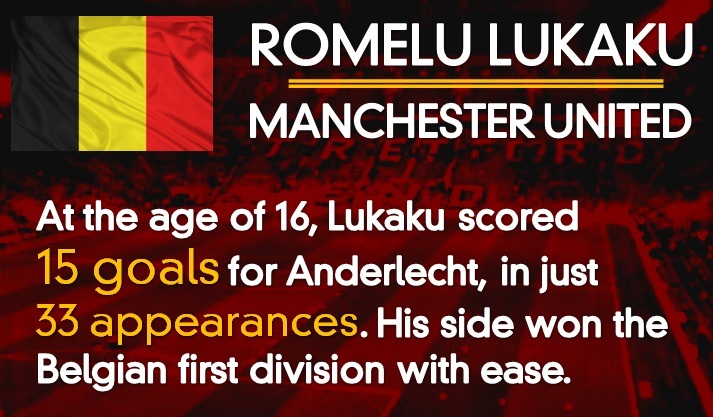 By the age of 17, Lukaku was the target of London’s (then) ‘big two’ of Arsenal and Chelsea, having scored 15 goals in 2009/10. This made him the first division’s top goalscorer of that season. More impressively, he did this while he was still a schoolboy, as noted on BBC Sport at the time. Lukaku, legally and metaphorically, came of age a year later when he did indeed move to Stamford Bridge, and the cut-and-thrust of the Premier League. It was a premature move for Lukaku, who failed to score even a solitary goal in ten appearances. A season-long loan spell at West Bromwich in 2012/13 proved his making in England, with 17 goals in 35 appearances for the Baggies, as Steve Clarke’s side emerged a surprise package in the first half of that campaign. The aforementioned loan move and permanent switch to Everton put the finishing touches on Lukaku’s star status, turning him into the £75m-priced colossus the world beholds today.

Forget about the price tag?

To date, Lukaku boasts a career average of 0.46 goals per game, as noted on Soccerbase. Yet, for all his credentials, Lukaku has not been without his critics. Those Evertonians who are particularly embittered by this move have been quick to criticise his inability to perform in the ‘big games’. For the impact he will make on the Old Trafford wage bill, it would not be unreasonable to assert that single-handedly destroying the likes of Hull and Bournemouth is the very minimum that a player of Lukaku’s calibre should be capable of. Yet, in April 2016, when Everton faced an Anfield derby and an FA Cup semi-final against Manchester United in the space of three days, Lukaku chose to be at his very worst in what was already an alarming slump in form. It was helped in no small part by the game plans of the soon-to-be sacked manager Roberto Martinez, but there are still lingering doubts about the Belgian’s ability to play when the going is foul, rather than fair.

At 24, Lukaku is now approaching the peak of his career and playing abilities, and what he brings to Old Trafford is self-evident. Indeed, his transfer to Manchester United has (as of 11 July, 2017) caused the Red Devils’ odds of Premier League glory to fall to just 10/3 on Bet Way. While not blessed with pace or a quick turn – or even much of an ability to make use of a ‘nothing ball’ – Lukaku is still, undisputedly, one of the most lethal finishers in Europe today. If a winger can find Lukaku anywhere in the box and facing goal, he will score. If a central midfielder can deliver a decent through-ball anywhere near the ‘D’, with Lukaku in space and facing goal, there will (again) be but one result. Additionally, there is every chance that United’s coaching staff will address his weaknesses once and for all, and doing so successfully will make Lukaku the closest emulation of a perfect striker in living memory.

Lukaku’s physique is obviously his main asset, and his inclusion in the squad will change the existing dynamic of Manchester United in some very significant ways – perhaps even enough to merit a place on Manchester United’s song sheet. Not unlike club legend Ruud van Nistelrooy, Lukaku is a certified ‘target man’, and with nothing taken for granted by any club, every team is now in need of a hero in the final third. After years of mismanagement, Jose Mourinho has finally given United a very real focal point for attacks, and 2017/18 represents a golden opportunity to reclaim that which was once a formality of a fixture in the United trophy room: the Premier League trophy.