On Tuesday night in Athens, David Moyes lay slumped back in his seat, his United career in tatters. Far from being unfair, much of United’s support and the media labelled it as one of United’s worst ever performances, and certainly a new low point in Moyes’s reign. Many reds who made the long trip to Athens reported that the City was tired and run down, a very similar description could be used for United’s performance on the night. 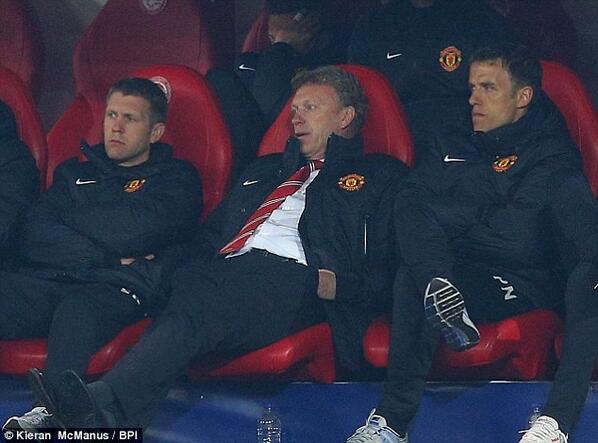 Reports soon emerged on Wednesday morning that the Scotsman was set for the chop, with Old Trafford’s American owners finally losing patience. News then filtered through from the club that they were in fact baffled by the stories and Moyes’s job is in fact safe. Perhaps the damage had already been done though, even the most loyal supporters of United’s struggling manager would find it hard to admit that they weren’t in the slightest bit excited that this nightmare could be over. The fact of the matter is that it is clear Moyes has lost the dressing room with the comments from Van Persie, and Michael Carrick’s red faced interview just two of the many examples. Plenty of reds still have no problem with Moyes being given more time, but it is no secret in football the task he will have ahead if the dressing room has been lost. The month ahead could more than likely be a defining one for the ‘chosen one’, I’m sure the man himself is more frightened than anyone about how things may pan out.

The red’s travel to the Hawthorn’s on Saturday following a ten day rest, perhaps plenty of time for all of Tuesday’s culprits to reflect on their own personal lack effort and desire for the biggest club in the world as of late. They will come face to face against another club struggling for confidence , some labelling it as the battle between the managers, winner stays on. A win for United and that could see David Moyes ending Pepe Mel’s short career in England thus highlighting the unquestionable patience Moyes had had at United and the fact he is lucky enough to have been blessed with the United job. If the squad actually turn up on Saturday and perform at a similar level to that against Palace they should be able to win that game, but as we all know this more than likely may not happen. Spell even more pressure for Moyes.

The big three games in March come against Liverpool, City and Olympiakos however, with a tricky trip to West Ham sandwiched in between these ten days of possible hell for David Moyes. Without being disrespectful to West Ham, a game United could quite easily lose, the real harm and embarrassment could undoubtedly be caused in the other three games. The most dangerous Liverpool side in years come to Old Trafford on Sunday 16th, and whether you like to admit it or not, on current form they could completely turn United over on the Old Trafford turf. A mauling by United’s fiercest rivals at home could start to make Moyes’s future untenable, the sheer embarrassment that would be seen up in the stands by United’s support possibly being a key factor. Trying not to be too negative though; this game in some respects represents United’s cup final now in the lost cause of the league campaign, something we have mocked the scousers for many a time in the past. Yet again though the Merseyside club think this is their year, what a great chance for Moyes to win some support around and stick a huge spanner in the works of Liverpool’s so-called title challenge.

United then brush themselves off for arguably the biggest of the three games, the return leg of Olympiakos in the one competition United really have something left to play for. Many rightfully think the damage has already been done in this one; but the ground will be rocking on the night, and an early goal for United could just help make it one of those memorable European night’s in Manchester. The performance against Liverpool just three days earlier may prove a huge factor in the way this tie goes, United could be taking to the field as a team with rising confidence or a side that would quite simply rather stay back in that changing room.

Fast forward six days and the reds then face the task of a Manchester Derby on the back of a tricky trip to Upton Park. Again, the previous performances could have a slight baring on this game, but it truth, many reds will struggle to see United winning this one. The pressure may be off Moyes’s shoulders slightly as a result, that’s if United have at least had some positivity in the previous three games. Worst case scenario and the reds have taken a hiding from Liverpool and been knocked out of Europe then this match could put the icing on the cake for the Moyes out brigade and the future of the Scotsman himself. Old Trafford then  welcomes the visit of Aston Villa on Saturday 29th March, David Moyes may not be there to Welcome Paul Lambert however.

This horribly negative preview now comes to an end, the fact of the matter is, this is going to be one hell of a long month for David Moyes. As mentioned, one good result could prove the platform for the rest, helping re-invigorate United’s confidence and the performances we know that some of the players are capable of. An honest assessment for many reds would be that on paper a good month for the reds would involve a mammoth performance in Europe resulting in progression, and at least half decent performances against United’s two biggest rivals to ensure no further embarrassment is heaped on this record breaking season. A chance at least is presented to David Moyes to put a feel good factor back into the red half of Manchester and the opportunity to win increasingly large sections of the support around. The final scenario of course, ‘The Chosen One’ will be given time beyond the summer regardless of any of this.

6 replies on “The long month of March for Manchester United”

Great first piece for the website, Alex. Welcome aboard.

Are you and your long ball GARBAGE looking forward to the 16th of March for your Cup Final? – got the ref booked yet???.

Liverpool will give us a hiding, we all know it.

Beware the Ides of March?

If we have good results against Olympiacos, City and Liverpool, then I will be happy.

If we have bad results (the likely outcome) then surely Moyes exit will be hastened and for this I will be happy.

The nightmare scenario is that we have a bad March and Moyes is still here next season.

Never thought that someday I would ever say something like that, but if this three losses mean the end of Moyes career at United, than I wish us to loose than all.