David Moyes and Manchester United have contacted Southampton regarding the availability of young left-back Luke Shaw, according to Ben Smith at the BBC.

“#MUFC have contacted Southampton over left-back Luke Shaw but have been told sternly he is not for sale at any price,” says @BenSmithBBC 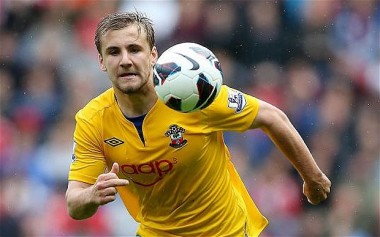 Southampton executive chairman Nicola Cortese has already stated at the start of the transfer window that the club will reject all offers for the England U21-left-back and by the sounds of United’s latest advances, all enquiries have been met with a stern ‘Not for sale’ stance.

The 18-year-old has recently been linked with a switch to Chelsea in which he is a huge fan of, many fans of Manchester United would rather that David Moyes went for the youth of Luke Shaw over the longly anticipated Leighton Baines from Everton.

According to recent reports Manchester United, Chelsea and Arsenal are all after Luke Shaw, with a valuation that is expected to be around £20million.

Manchester United have their left-back position very much on the transfer plans, with Patrice Evra likely to be moving to Monaco at the end of the season in a bumper pay-day deal. Fabio Coentrão, Leighton Baines and Luke Shaw all have been linked with a move to the current Premier League champions.

Why would Baines leave Everton? Would have to be purely for the cash because he’d be throwing away a better chance of European football next year by moving to United. Also, after yesterday the FairPlay route into Europe looks to have gone. Capital One cup final against City is best chance of glory this year.

Dire team performance so far this season. Moyes just wont cut it in the hotseat. Should have persuaded guardiola instead. Proven top class manager with a good understanding of how to get the best out of his players! Should have a clear out of all the dead wood like evra fferdinand vidic young nani and kagawa and replace them with quality players like mata allaba hummels and Diego costa as well as Barkley and koke 2.

the problem is that the solution that you proposed is only legit in fifa14 world.do you really think bayern would sell alaba,dortmund would sell hummels,chelsea would sell mata and athletico would sell both diego costa and koke.i don’t think so

Well i can but pray that we somehow develop a spine again as its like jelly in the middle of the park. It pains me to watch them at present. Absolutely gutted that the team are as bad as they are.

buttner is good. He is fantastic he needs some game time 2 prove his skills. Just buyt a player maker who can push the team foward.

Coentrao signed? Any truth in that? Buttner needs time to grow i think Fabio is a good stand in but if we have got coentrao then im happy with that. Mata should be next and a holding midfielder to give carrick and fletcher a break as they ain’t fit enough to survive the rest of the season.

Shaw would be a good long term replacement for evra if he continues to develop as he is, problem being is he is a Chelsea fan so not very promising for us.