Caretaker manager Kevin Ball on facing this current United side: “When things change, it takes time to build some sort of momentum, and I have no doubt in time, that will happen there. I just look at it as Manchester United. I know what quality of players they have got and know it’s going to be a very difficult game.” 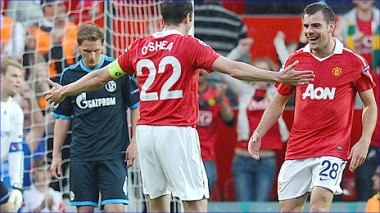 Reds Captain Nemanja Vidic ahead of the game: “I think we have to perform well at Sunderland, like we did against Shakhtar, in terms of our defending. With the quality we have up front, we are always able to score goals. I think there’s no question about that.”

The 50-year-old official has taken charge of only two Premier League matches this season, showing 5 yellow cards and awarding 1 penalty. Was last seen by United fans during January’s 1-1 draw away to Tottenham. Officiated last season’s 3-1 home win over Sunderland.

The last team to win the top-flight title after having lost three of their first six games was Portsmouth in 1949-50.

Against West Brom, Wayne Rooney scored from a free-kick for the third Premier League game in a row. The last player to score more in a single season was Cristiano Ronaldo (four in 2008-09).

Sunderland remain one of only three teams that have yet to keep a Premier League clean sheet this season (alongside Crystal Palace, Cardiff City and Fulham).

United have never lost a Premier League match at the Stadium of Light. In fact, the Reds have only ever conceded 6 goals at the ground (in 11 games).

John O’Shea holds the record (with Paul Scholes) for the most United appearances vs Sunderland at the Stadium of Light (7). He will captain The Black Cats on Saturday.

Kevin Ball was in caretaker charge when Sunderland earned a 0-0 draw at Old Trafford in the 2005-06 season.

United are unbeaten against Sunderland in the last 19 matches, all in the Premier League.

What do you think the score will be between Sunderland vs Manchester United? Comment in the section below.

Hope we see United attack right away and stress them and get some goals for the fans sake,instead of paying to watch a load of defensive rubbish.

Yes i definatly agree cb comment united got powerful attack moyes used them correctly and don’t forget to use the famous hairdryer if they seem sleep on attack. We fan want goal not watching them defending.

With this statistgies kagawa will play in central and will giving wonderful assist to van persie to score and valencia,rooney also cross for van persie to score. That seem the way for goal david moyes try this in sunderland match.

As for sub coming
anderson or cleversly (fellaini)
chicharito(van persie if he doesn’t score or seem lost in the game because of injuries recover he will take time to score)
januzaj(rafael) then valencia went in rafael place. Wow it will be great powerful attack.

4-2-1-3. Kagawa will shine in central as creative attacking midfielder moyes.

no kagawa,no manchester!!
moyes is relly wasting talent at utd cose kagawa is de best I have ever seen