United suffered an embarrassing and comprehensive defeat at the Etihad to leave us with a mere seven points from the first five games and reeling from a second defeat to bitter rivals in a matter of weeks.  But that was the only comparison that could be made with the defeat to Liverpool, where an ordinary United lost to a single goal to unremarkable opposition: here, we allowed a far better side to run rampant and, as the game wore miserably on, the result became ultimately as predictable as it was painful.  With United starting the game without Van Persie, who’d picked up a thigh strain, city seemed to have the impetus from the start and produced perhaps the first performance of any side this season to show the mark of potential champions.

If such a statement makes painful reading for United fans, the viewing of events was – needless to say – far worse.  The opener followed a period of concerted pressure and, although United initially looked able to soak it up, the goal that came after 15 minutes became increasingly inevitable.  Aguero’s finish was excellent, but United’s defending on the right was woefully inadequate, with Valencia failing to track back and leaving Smalling with the task of dealing with two city players, a gap which our opponentes with quick to pounce on.  Kolarov was allowed a simple cross that Aguero met sweetly on the volley to give city the lead.   It was all too emblematic of United;s performance as a whole, with city showing more penetration, organisation and composure in every department of the pitch. 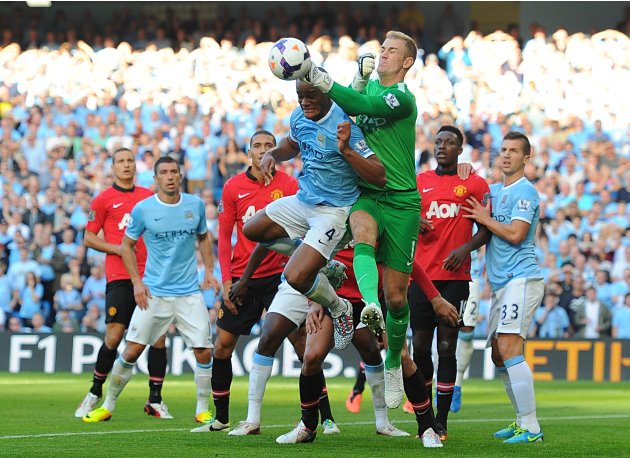 What United were lacking was a genuine creative and attacking option in midfield and, with Yaya Toure running the show, the Reds found themselves frequently pegged back and invariably seeking the wide option of Young or Valencia, whose runs were consistently snuffed out with little trouble by the city full-backs.  As the half went on, Fellaini increasingly took on a more advanced role, which gave us more of an attacking threat, forced back Toure and allowed Carrick more space to operate.   This reduced city’s possession but was the equivalent of plugging a single leaky hole in a roof that’s got half a dozen of them.  With Kompany effectively keeping Rooney out of the game, they remained unquestionably the better side and doubled the margin just on half-time when the United defence made an attempt to deal with a corner that many a non-league side would have asked questions about in the dressing room, and Yaya Toure pounced to stab home at the far post.

It was sadly similar poor defending that led to city’s third straight after the break, both Ferdinand and Fellaini failing to get back and pick up Aguero, who drifted into the space vacated to grab an easy goal after Negredo had out-muscled Vidic to provide a cross that ought to have been anticipated and at least an attempt made to do something about.  As it was, Aguero was never going to pass up such an opportunity.  Not was Nasri, who got on the end of a cross from Navas that, once again, United’s defence were unable to cut out,, to make it four.  Cleverley came on for Young immediately afterwards, but the phrase shutting the door after the horse has bolted was inescapable.  Not only that, but the ineffective Young was not the only problem and only some fine last ditch defending from Vidic prevented a fifth for city in the moments immediately after the change.

Cleverley’s introduction allowed United to change to a 4-3-3 formation which, in retrospect, was perhaps always a better bet in terms of dealing with the city threat and, from this point, United looked better equipped, though against a side happy to soak up pressure and with only an occasional interest in trying to pick up another on the break.   Rooney grabbed a consolation goal with a brilliantly placed free kick that inched beyond Hart’s reach and into the top right-hand corner.

We were, sad to say, already well-beaten and it’s a defeat that, especially coming against this opposition, will inevitably having many Reds questioning Moyes’ approach, especially regarding the all-too predictable formation and the decision once again to play Young in preference to Kagawa or Nani.  For my own part, I’ll point to the fact that, many times in the past, a United team under Ferguson needed a shock like this to sort things out and kick-start a lukewarm opening to the season, which this has certainly been.  Questionable formation or not, there were abject performances here from too many United players and.for some of them, it’s not the first time this season. 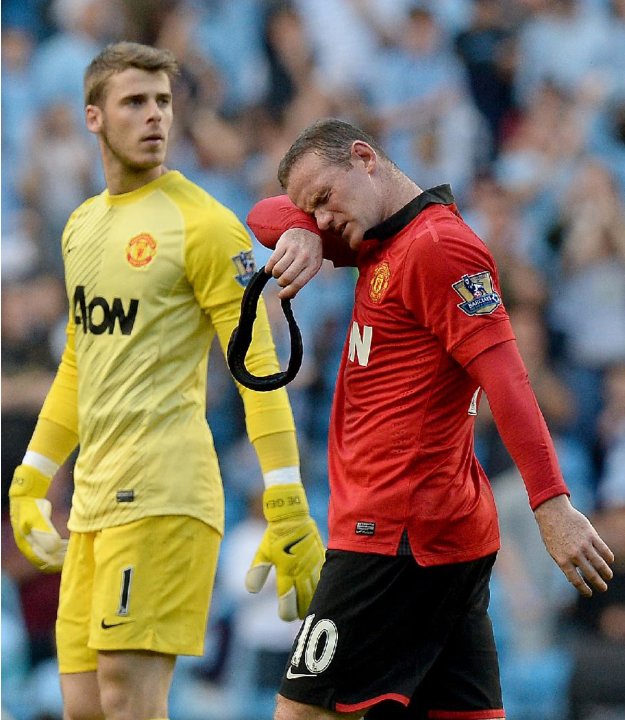 A defeat like this, however, cap sap confidence and morale and can potentially be even more damaging than three points dropped. With a tricky opening league programme now over, and with no team establishing any kind of strangle-hold on the table, it’s to be hoped that heads can be knocked together and we don’t allow the gap between us and our rivals to grow any further.  But a few more performances like this and we can say goodbye to any hopes of seriously competing for the title this season.

[…] United lost 4-1 to rival Manchester City, but even if Robin van Persie would of featured we doubt it would of made […]

Bird feathers everywhere as the chickens come home to roost.

Ferguson’s inability or unwillingness to regenerate the midfield over the last three years has left United desperately short of energy, inventiveness and guile. Add to that, the new regime’s lamentable efforts during the transfer window and there is cause for concern.

Last season, Van Persie’s goals papered over the cracks but it’s unlikely to happen again. The addition of Fellaini is a positive move but the likes of Anderson, Young, Valencia and Cleverley hardly strike fear into the opposition. A goal from a Rooney freekick is the only score achieved in four and a half hours of play against Chelsea, Liverpool and City. Things were not much better against ten man Palace. I would like to see more use made of Kagawa, Nani, Januzaj, Zaha and Lingard.

As far as the game is concerned United were outplayed in all departments. Rooney was the only United player to come out with any credit.

Whether this kick up the arse becomes the kick start for United’s season remains to be seen.

Saw the team and knew we were in for a tough day ,young just not good enough ,every defender knows what he’s going to do ,step in side and gloat a cross in that the keeper has all the time in the world to collect .im sorry but for me fellani was at falt for 3 goals he let aguero loose him twice and lost toure at the corner,this club is to big for him he looked lost today as for welbeck like Bambi on ice not good enough ,Valencia and young not doing there defensive duties cost us too leading up to the 2nd goal a city throw zabaleta throws it in and goes for the return young switches off and just blocks It for a corner this move can be seen down the fields of turn moss on a Sunday morning yet it defeats a pro footballer”come on” .where is zaha,kagowa,janetai,lads who want to attack the defence not just go through the motions are we now goingto be content with being red Everton ,average because that’s where we are heading