It was one of those matches that gets described as ‘pulsating’ although, in truth, United didn’t really get going until the last half hour of the game and it would be harsh to argue that West Ham didn’t deserve a share of the spoils in this 2-2 draw.

The Reds started the game like a team with their laces tied together.  Despite only one change from Sunday, conspicuously absent were the control and easy dominance of that victory at the Britannia Stadium.  West Ham, it must be admitted, didn’t exactly lie down like the new meek Stoke City, but even so it was a jittery start more characteristic of a team affected by the travails of a tight title scrap rather than one easing towards the finishing line.

Duly, it was West Ham who opened the scoring, Carroll’s nod down giving Vaz Tae an easy chance which he converted without fuss.  Carroll’s only other contribution of note was the appalling ‘challenge’ on De Gea just before the half-time whistle which unbelievably went unpenalised.  The only thing more remarkable than the lack of at least a yellow card was that someone once deemed it appropriate to blow £35 million they couldn’t afford on this throwback to English football’s dark ages.  That he was booked for a far less physical challenge on the United keeper five minutes into the second half was laughable, although both incidents provided heartening evidence that De Gea isn’t about to be bullied so easily in such situations nowadays.

By then United were level, easing up the gears for Kagawa to present Valencia with a tap-in after half an hour. 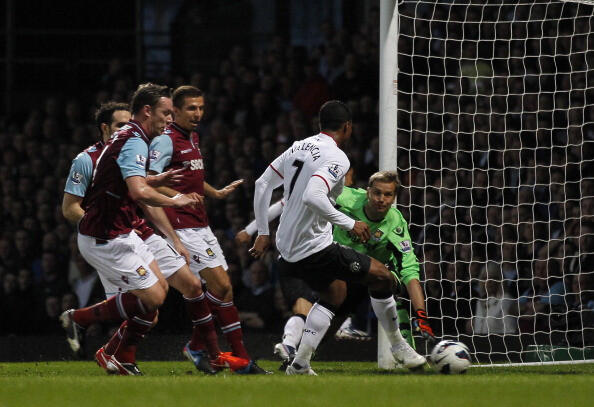 It was a rare glimpse of United’s slick passing game, not to mention our only shot on target in the first half.  The goal that put West Ham back in front was a peach, Diame striking a curling left foot shot through a crowd of defenders to sneak it in at De Gea’s far post.

After that United finally began to rampage forward with purpose.   Rooney had a shot cleared off the line after Jaaskelainen fumbled, while the keeper redeemed himself with a fine save from Van Persie, before Chicharito had a shot after his trademark arrival at the near posted spooned away by Carroll.

Kagawa hit the post only for Van Persie to come steaming in on the loose ball to hammer it hall in characteristically decisive style.  RVP may have been offside, but we’ve had so many crap decisions at the Boleyn Ground over the years that I refuse to lose any sleep about it.   Still expecting some bright spark on the city or Liverpool forums to claim it as the reason for us winning the league, though.

City’s late winner against Wigan means they close the gap on us but I doubt any Reds will be allowing that to interrupt their slumber either.  It would, however, now take a city defeat at Spurs at the weekend to allow us to seal the championship at home to Villa on Monday night.

Only got going after they went 2-1 up. Not good enough.
Yet again we have a poor midfield set up. Overloaded on the right hand side and relying on Evra to attack down the left (and exposed when it broke down). Certainly need a rethink in midfield and at the end of season we need to strengthen there with someone who can dictate a game.
Kagawa played well now he had a free role just behind RVP
Rooney taken off was strange – I would have taken off Jones – maybe there is some truth in the rumours about him leaving. I was unsure of the position Rooney was playing
Chico looked sharp and I am sure with better service would have produced the winner.
Congrats to West Ham. Their attacking play caused us quite a few problems and 2-2 was probably the right result.
All I can say is say thanks for such a large lead over City because we are not playing like champions at the moment and are limping towards the 20th

It was a performance that we have come to expect from this Man Utd team, but I think this was a good point tonight. Upton Park is always a difficult ground for us and West Ham is always a battle. They are a tough team and play strong aggressive stuff with high balls. I think we did well to come away with the point and now we can move on. We have just played 2 away games against Stoke and West Ham back to back and we have come away with 4 -points. I always thought these two games would be the difficult ones on our fixture list.

We have 5 games left and three of them are at home so its all in our hands. The next game is against Aston Villa at home and Ferguson will be demanding three points in that match. If we can get the win next Monday that we are on our way to the title. Its about getting the job done, not doing it as quickly as possible. I didn’t want to lost tonight so I was happy the players fought and got the draw. We could have won but a draw was a fair result. Man City have a tough away game against Spurs, who will hopefully have Bale back in their ranks. If they lost that match, then a victory against Villa is all we need to secure the title.

However if we have to go to the Arsenal and try and win the title then that is what we will do. If Spurs lost to Man City then it will effect their chances of getting into the top 4. It will mean we have to wait to secure the title, but the flip side is that we could go and get Bale from Spurs. Maybe in my dreams!!!!

West Ham fan here. thought was an enjoyable game and although RVP was offside and it wasn’t even a difficult call to make I tend to agree that the result was a fair one. What impressed me about you guys was the refusal to accept defeat and how well you can keep the ball. The blue side might have closed the gap but the title is your’s and fully deserved. One thing on AC if you look closely as he jumps he gets a little push from Vidic which helps him on his way a bit, he was totally focused on trying to win the ball and there was no intent to hurt De Gea. Clumsy, yes but nothing more.

yup! we have weak in midfield. no need to buy a players, just use our quality young players in U21s. some of those young players are ready for promoting to regular. just give them a chance and then we have our judgement.
2-2 was a fair result. we are great in front but we have several weak to fixed it. maybe i could say, CBs & Midfield are our weakness. no offense, but, we need young player. we need energy in that area to compare our opponents.
next against villa at home. hoping, we’ll win a big score at Old Trafford.