Greater Manchester Police have arrested a 15-year-old boy after investigating a racist tweet sent about Rio Ferdinand during the Manchester derby on Sunday.

Police arrested the teenager, who cannot be named, on Monday night at his home in Manchester on suspicion on a public order offence of racial aggravation.

Greater Manchester Police were advised about the racist remarks on the social media network of Twitter, after direct tweets regarding Manchester United’s Rio Ferdinand were sent during the fiery 3-2 win.

The boy has been bailed pending further inquiries from the police.

The Manchester derby was a heated affair both on and off the pitch as Rio Ferdinand was left with a cut to his left eyebrow after being hit by a 2p coin after celebrating Robin van Persie’s winning free-kick in the 91st-minute at the Etihad Stadium.

In the aftermath Manchester City fan Matthew Stott, 21, had to be restrained by goalkeeper Joe Hart after gaining access to the pitch & trying to confront Ferdinand, Stott was arrested at the time. 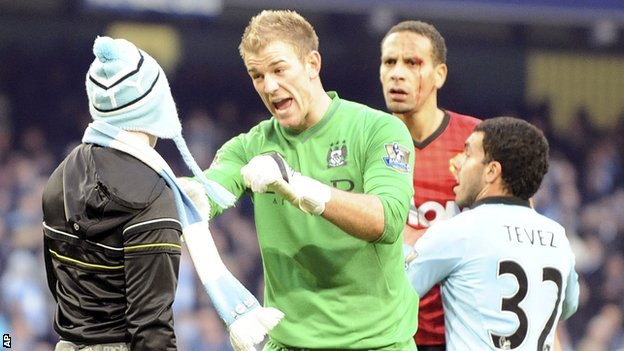 Police made nine arrests in which all will appear in court at the start of 2013, Greater Manchester Police have appealed for anyone with information about hooligans throwing coins to get in touch directly.