After a 3-2 win against Braga on Tuesday night which sees the Reds all but qualified for the knockout stages of the Champions League, attentions turn back to the Premier League as United travel down to Stamford Bridge to take on current league-leaders Chelsea. The Reds currently sit in second place four points behind Chelsea so will be anxious to at least come away with a point from Sunday’s encounter.

I wait with horror to see which formation the manager opts to play on Sunday. It’s likely that we may see a continuation of the midfield diamond that has been deployed in recent weeks and which for me makes the Reds too pedestrian, predictable and narrow. It was clear in the first half of Tuesday night’s game that the central midfielders were receiving the ball and instinctively looking out wide only to find no United player there. Playing a winger-less formation relies on a team having players with the ability to drive forward from central midfield and beat a man and, unfortunately, United don’t possess players of that ilk. On the other hand, we do possess wingers of genuine quality with the speed and skill to trouble any defender and so his decision to either play without wingers or to play players who aren’t natural wingers on the wing mystifies me.

Anyway, on to the goalkeeping position and David de Gea should start on Sunday. With the Spaniard having started the last four games, it appears as though the manager has decided that de Gea is the number one; a correct decision in my view as de Gea is undoubtedly more talented than Anders Lindegaard. In last season’s encounter, it appeared that a Juan Mata free-kick that was destined for the top corner was going to cruelly deprive United of a point after the Reds had battled back from 3-0 down to level the scores. However, de Gea produced a fantastic one-handed save to deny his fellow Spaniard and secure the point.

In defence, Rafael who, in my opinion, has been United’s best player this season will start at right-back whilst at centre- back Jonny Evans and Rio Ferdinand – who was rested against Braga – should rekindle their partnership, allowing Michael Carrick to move upfield to his favoured central-midfield position. At left back, Patrice Evra, who like Ferdinand was given a rest against Braga, should replace Alex Buttner who didn’t put in the most convincing of defensive performances against the Portuguese side in midweek.

It’s fair to say that United have been decidedly dodgy at the back this season. It seems as though United may as well come out of the tunnel 1-0 down considering the Reds have fallen behind in 8 out of 12 matches in all competitions this season. Whilst United have showcased great resilience and the infamous never-say-die attitude ingrained in the club in coming back to win 6 of those 8 matches, going a goal (or two) behind is becoming a worrying trend, particularly because against the better teams you will struggle to recover the situation: it’s telling that the two games in which United have lost after going behind have been against the two best teams they’ve faced this season in Everton and Tottenham. Against Chelsea, it’s vital United return to some semblance of defensive solidity otherwise it could be a long afternoon for the Reds.

The composition of United’s midfield on Sunday will obviously depend on which formation the manager opts to play although the decision to rest Paul Scholes in midweek suggests the 37 year-old is in line to start. Wise decision? For me no, because although there’s no doubting his passing ability as well as his capacity to control the tempo of a game, these abilities are best utilised in games where the Reds are guaranteed to dominate possession. Against Chelsea, it’s unlikely that will be the case and so the game could simply pass Scholes by in much the same way the first half against Spurs did. For that reason, I’d be more inclined to get some legs in midfield with either Anderson or Tom Cleverley starting. Like Scholes, Antonio Valencia wasn’t involved on Tuesday night and should start. Ashley Cole certainly won’t be looking forward to facing the Ecuadorian considering Valencia has given the England left-back a torrid time over the last few seasons. As the old joke goes, Cole’s still looking at a map of Spain trying to work out where Valencia is…

Up front, the manager is in one of those situations that fellow mangers would both envy and be thankful that they haven’t got. Envious of the fact Sir Alex Ferguson has four top-class strikers to choose from but thankful they don’t have to tell any of them they’re not starting this week. After Robin van Persie, Wayne Rooney and Danny Welbeck all scored against Stoke last weekend, Javier Hernandez responded in impressive fashion by producing quite possibly his best performance in a year as his two goals started and sealed the comeback against Braga. However, it wasn’t just his goals that impressed me; his hold-up play – which has often been poor – and passing were both top notch. With Rooney and van Persie virtually assured of their place in the starting eleven, should the manager decide to play with 3 strikers again, it will come down to a shoot-out between the Mexican international and Welbeck. Whilst Welbeck probably offers more than Hernandez by way of his superior all round game, his finishing is still suspect and Hernandez’s welcome return to form on Tuesday may mean he gets the nod.

The European champions – it pains me to write that – have started the season in impressive form; domestically at least where seven wins and a draw from their opening eight games leaves them top of the table four points ahead of United who sit in second. Having said that, Chelsea have perhaps received too much praise for my liking. Their fixtures haven’t been particularly tasking so far whilst their troubles in the Champions League (and 4-1 loss to Atletico Madrid in the Super Cup Final) indicate that they aren’t as good a team as people have made out. Even their 4-2 win at White Hart Lane last Saturday can be tempered by the fact that they were fortunate to come up against Spurs at a time when they were missing their two best players in Mousa Dembele and Gareth Bale who needs to reassess his priorities having thought that witnessing the birth of his first child was more important than playing for Spurs… 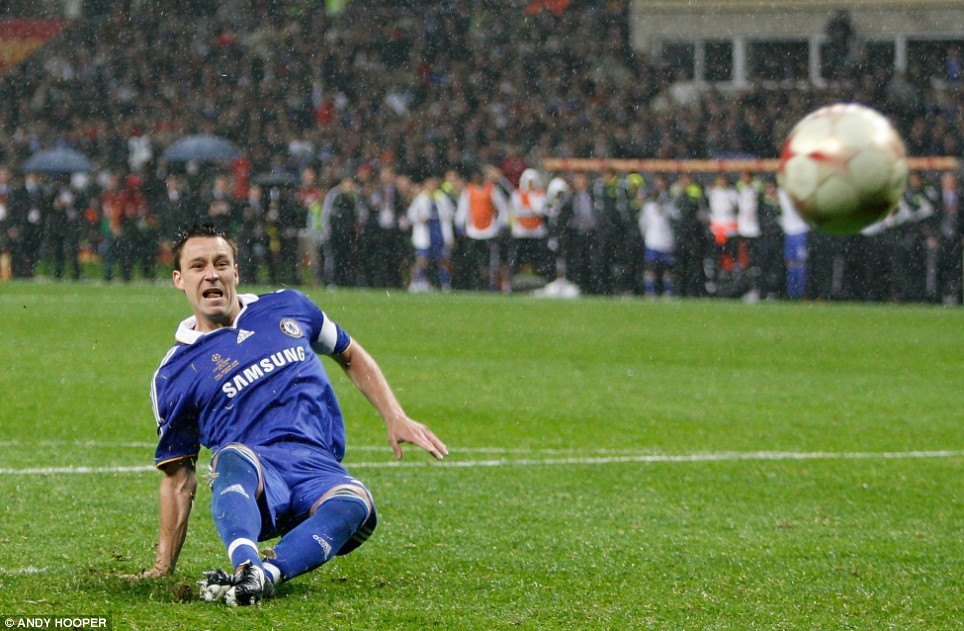 Although they haven’t looked as shaky at the back as United this season, Chelsea are definitely susceptible defensively as their travails in Europe have demonstrated. Petr Cech, whilst still a top goalkeeper, has never reached the same heights he’d got to before his head injury whilst United will be thinking they can exploit the central-defensive partnership of Gary Cahill and the rash, error-prone David Luiz who will start in the enforced absence of disgraced captain John Terry. That penalty miss in Moscow really couldn’t have happened to a nicer guy…

It’s in midfield and attack this season where Chelsea have really impressed; some of their football reminiscent of the free-flowing football they played during Mourinho’s first season in charge of the club. Central to their impressive start has been the diminutive Juan Mata (scorer of two goals against Spurs last Saturday) who is a delight to watch; his intricate passing ability and constant probing a source of menace to many defences. Summer signings Eden Hazard and Oscar have combined with Mata to provide a tricky triumvirate who possess the abilities to unlock the tightest of defences. That said United will have to vastly improve on their defensive showings if they are going to keep the aforementioned trio quiet on Sunday.

The loss of Didier Drogba in the summer has elevated Fernando Torres to the starting role of centre-forward and whilst the Spaniard – who has four goals to his name in the league this season – has shown glimpses of his talent, he’s never returned to the heights he reached during his first season in England. The Blues also possess a couple of pacy, young talents in Daniel Sturridge and Victor Moses whose pace could trouble United if they come off the bench late on.

In terms of recent history between the two sides, United are unbeaten in their last five games against Chelsea, winning four and drawing one. However, although United won at Stamford Bridge in the first leg of the 2011 Champions League quarter-final, they haven’t recorded a victory at Stamford Bridge in the Premier League since April 2002 when goals from Paul Scholes, Ole Gunnar Solskjaer and Ruud van Nistelrooy – who this week announced that he would be returning to Old Trafford for the first time since his acrimonious departure in order to attend the QPR game and see the unveiling of the Sir Alex Ferguson statue on the 24th November – gave the Reds victory. However, that record is slightly misleading with United’s performances down there often worthy of at least a point.

Last year, the Reds battled back from 3-0 down to salvage a point although the game could have been so different if Howard Webb had dismissed Gary Cahill when, with only 11 minutes gone and the score still 0-0, the Chelsea centre-back fouled Welbeck who was through on goal. It was an inexplicably bad refereeing decision; something that has been a factor in many of the encounters between the two teams at Stamford Bridge. On countless occasions, United have been denied draws or victories down there due to terrible refereeing

performances and so the players and staff will surely be feeling they’re due some luck (and a victory) this weekend.

Sunday’s game could be another high-scoring encounter between the two sides with neither side appearing convincing defensively but both sides looking extremely dangerous going forward. One telling stat: Robin van Persie has scored the joint-most goals (5) of any visiting player at Stamford Bridge in Premier League history. Here’s hoping the Dutchman still has his fondness for scoring at Stamford Bridge and fires the Reds to victory on Sunday.

As much as I’d love Hernandez to play, Cleverley NEEDS to be in the team otherwsie I can se e our midfield being 2nd best.

Or Anderson but I suspect he’ll be used on Wednesday in the League Cup game.
Let’s av it United! We Haven’t won there in the league since 02. Fucking hell: come on lads! Time to put things right! MUFC!