Scoring on your debut for the Manchester United first team is a dream to any a young man, but to do so twice, really was the icing on the cake for James Wilson when Ryan Giggs gave him the chance at Old Trafford at the end of last season.

Since then, the 18-year-old has been working hard during pre-season training to be knocking on that first-team door for the 2014/15 season. There was much hope that we would’ve seen James Wilson feature during the first teams pre-season tour of the United States, but he was not part of the travelling squad that left Manchester last Friday afternoon. Now the reason has been concluded.

During training last week, James Wilson had fractured his left index finger, which is now tightly supported once playing football.

On Tuesday evening, Wilson featured for 45-minutes for a Manchester United XI against Southport, a game which finished 0-0. 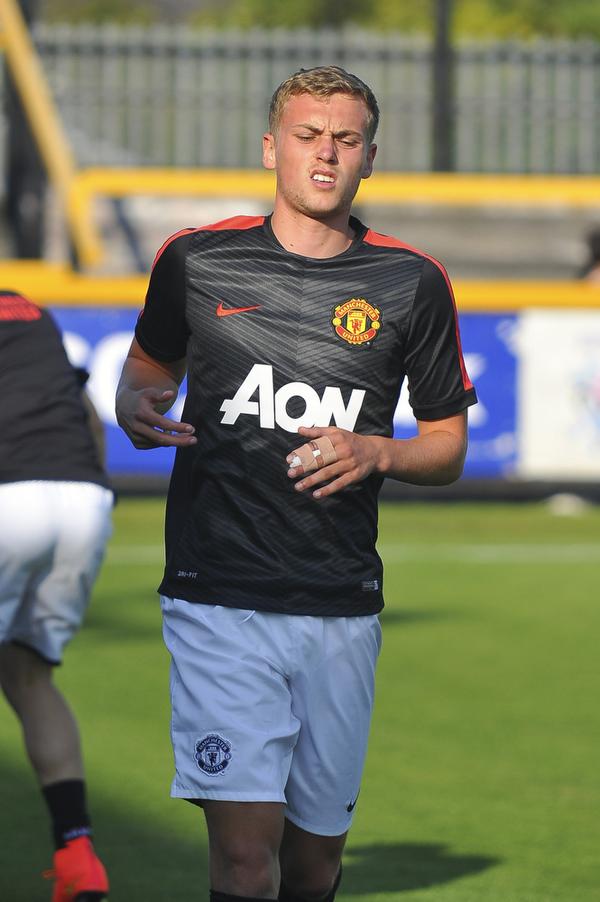 Wilson played well up top for the first half, just in front of the departing Bebe, with only a few chances created he didn’t really have the opportunities to spark into life, much to be said of the game itself to be honest.

Wilson’s finger was clearly swollen, as seen without the support during the second half on the substitutes bench.

It is rumoured that Nick Powell might be called up for the Manchester United squad over in the US, so who knows, we might see James Wilson or Tom Lawrence called up before the end of the tour.

Great read all positive. And informative on the reserves and youth teams keep up the good work chaps

I actually think perhaps being left at home from the tour is not a “bad” thing. LvG said that during his evaluation there would be players that the coaches would want to work with one on one.
I think that Wilson, Lawrence and Powell are players he plans on keeping and bringing along, while the ones on tour are still being evaluated.
His coaches will be able to work with the 3 in a more intimate fashion and get them fully versed in the things they need to know about LvG’s philosophy.
7 Hours and 40 mins to the start of a bright new Era in United football!