One of the most common topics of discussion among United supporters on social media is the weakness of the squad, and in particular, the midfield. There is no denying that United have been muddling through without a world-class midfield for many years but rumours of this squad’s footballing death have been somewhat exaggerated.

For a comparison, take Liverpool’s first team offering on most match days. They undoubtedly have a strong attack with Suarez, Sturridge, Sterling and Coutinho but is it stronger than an attack comprising van Persie, Rooney, Mata and Januzaj?

Moving into central midfield, Liverpool can offer Gerrard and Henderson. Not exactly world-beating is it? Gerrard’s best days are behind him and Henderson was the butt of many footballing jokes over the last couple of seasons due to his inability to recreate his Sunderland form at his new club. Most Liverpool supporters had written him off as a terrible buy but look at his form this season for them; he looks like a completely different player under Brendan Rodgers. 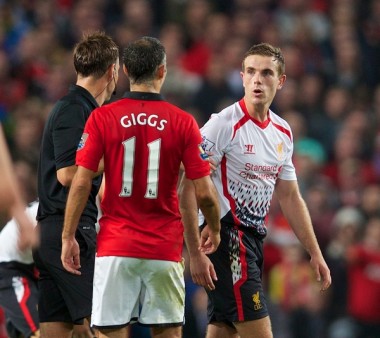 In defence, Liverpool are weak. Johnsen, Skrtel, Agger and Flanaghan. Would you swap any of our defenders for any of theirs? And in goal whilst Mignolet is a good, young keeper he is no David De Gea.

Overall, I think the United squad and particularly the first team is stronger than Liverpool’s. And yet they are scoring for fun and using this to hide the deficiencies of their midfield and defence whilst we are struggling to create and score nevermind keep a clean sheet against mediocre opposition.

The difference is very simple. Brendan Rodgers has an attacking footballing philosophy and he has spent the last season instilling that philosophy into the very core of the club and the players. He has a defined game plan and fields his players in a formation that suits their individual skills allowing him to set-up his team without having to negate the opposition’s threats too much. They are always vulnerable in defence but the way he sets them up to play means that their attack has the ball and runs at the opposition for much of the game, disrupting the opposition’s attacking shape. Sound familiar? It should do because Sir Alex utilised a similar tactic during his time at United.

Naturally it took Rodgers a season and a half for his philosophy to permeate the club and start to show in earnest on the pitch and by the same token we can’t expect David Moyes to come in and do things any quicker. We were all expecting a season of transition so I don’t think it’s a case of unrealistic expectations from the supporters that has led to the current level of unhappiness at how things have unraveled this season. Things have simply been far worse than any of us ever imagined.

The truly worrying thing for many of us is that we can’t see any evidence of a philosophy in United’s recent performances. To be honest, we haven’t even seen much evidence of a game plan and we certainly haven’t seen any forward momentum from one week to the next. The players seem as perplexed by their roles and responsibilities on the pitch this week as they did during pre-season. Either the Moyes philosophy is so alien to the players that it simply will not adhere to their psyche or he is failing to communicate it to them. In the Palace game we saw glimpses of a disciplined performance albeit one lacking somewhat in creativity. Unfortunately, as has so often has been the case this season, the next performance plumbed new depths culminating in one of the club’s worst performances in Europe. One step forward, eight steps back.

Those people who use the argument that the current performances are indicative of the weakness of the squad want us to believe that any manager except for the magical Warlock known as Sir Alex Ferguson would be in the same predicament if they presided over this group of players. Contrary to popular belief, Sir Alex is not a Warlock; he is just a very talented manager. Also contrary to popular belief this squad is not as bad as people like to make it out to be. I’m not sure why, possibly because it fits the narrative that Sir Alex was a genius after all and simultaneously supports his assertion to “get behind your new manager”.

This squad, on paper, is good enough to be comfortably in the top four. And this is backed up “off paper” by reminding ourselves that they are the current Champions of England. So logically, if the current management are not getting anywhere near a par score out of this current squad, how do we see the situation improving next season? If we add five new players in the summer but still lack a footballing philosophy or gameplan then they will underperform exactly as the players that they replaced have underperformed this season. And if you didn’t like the Liverpool comparison above then I invite you to conduct a similar thought experiment with Southampton. Forget the strength of the squad, we can all see Mario Pochettino’s footballing philosophy by the way they play despite the weaknesses in key positions in that squad. We would have no doubt that if he were able to attract better quality players that suited his style of play he would see improvements on the pitch.

If I were the Glazers I would see it as a big risk to give David Moyes any money to spend in the summer. He has not demonstrated a plan, never-mind a philosophy. In one game we peppered 81 crosses into the box and when the media made a big deal about this we put in fewer than 20 crosses in the very next game. Is this part of a plan or simply a manager who is reacting in a panic to each game as it comes? If his game plan was to put in crosses to big men in the box then at least I can see how him buying different players to fit this plan might work in the long run (although if that were the new United philosophy a large part of me would die inside).

If I use what I have seen this season to extrapolate what might happen next season then even if we buy five new players in the summer I cannot see much improving. In fact, given how far below their baseline the current squad is performing, even if Moyes managed to wave a wand such that we all really did all live in a Georgie Best world then numbers one to eleven would still struggle to get us into Europe next season.

For me, Moyes has until the end of the season to demonstrate that he can implement a gameplan that adheres to an over-arching philosophy congruent with United’s history as an attacking team. I don’t care as much about the results as I do about the style of play. Only then will I feel comfortable with him spending money in the Summer.

Manchester United’s Federico Macheda has rejoined Doncaster Rovers in a loan move that will see him stay at the club until the 31st December 2013. This is the second time this season that Macheda has […]

Anthony Martial may be the fastest player in the Premier League

French 19 year old, Anthony Martial, has taken Manchester United and the Premier League by storm. On his debut he scored an emphatic solo effort against United’s arch rivals, Liverpool, and has added 5 goals […]

Davide Petrucci & Scott Wootton to be loaned to Peterborough