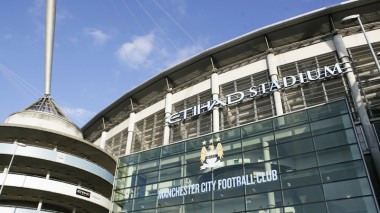 New manager Manuel Pellegrini ahead of his first Manchester derby: “Every game against Manchester United is important. I do not need to be here to know how important the derby is… Living here and working every day here you know it is a special game. It’s a match of six points. It is very important to win it.”

David Moyes ahead of the Sunday’s derby: “We’ve played well in the last few games and have got a bit of confidence and hopefully we’ll try and show that in the game on Sunday… We’ll go and we’ll try and take all the points.”

Recent meetings at the Etihad Stadium

The 42-year-old official has taken charge of 4 Premier League fixtures this season, dishing out 9 yellow cards. He has yet to award a penalty or send a player off. Was last seen by United fans during May’s home defeat to Chelsea, sending off Rafael.

Wayne Rooney has scored 6 goals in 9 United appearances at the Etihad.

Yaya Toure has averaged 86.8 passes per game so far this season – the highest in the division.

Rooney is United’s all-time leading scorer vs City with 10 goals in 19 appearances.

David Moyes won 9 of the last 12 meetings with City as Everton manager.

Should he feature, Phil Jones will make a 50th league appearance for Manchester United.

Manchester City have scored in each of their last 52 Premier League home games.

Wayne Rooney and Robin van Persie have scored a combined 28 goals in 23 Premier League starts together (van Persie 15 and Rooney 13).

Rooney has now either scored or assisted 40 goals in his last 44 Premier League games.

United have won just 1 of the last 5 Premier League away fixtures.

The past 8 meetings between the sides have produced 30 goals – an average of 4.3 per game.

U19 REPORT: Manchester United Youngsters Crash Out Of Europe

Juan Mata in The Middle at United is Mouthwatering

As the new Premier League season fast approaches, so too does the annual collective clamour to finalise your Fantasy Football squads. If the “kid on Christmas Eve” cliché aptly personifies the feeling one will have […]

When Sir Alex Ferguson told Joel Glazer about his decision to retire at the end of 2012/13 season, there was an “unanimous agreement” that David Moyes will take over the managerial helms at Old Trafford. […]