United began the 2013/14 Champions League campaign with a sound victory over a fairly ordinary looking Bayer Leverkusen side.  While there will be some concerns that we managed to leak two goals, United ran out comfortable winners due to a brace from Rooney, a beauty from Van Persie and a neat finish from Valencia.

United began the game looking controlled and patient, tentatively probing the German defence but creating few clear-cut chances with the exception of the move that led to the first goal: Evra received the ball on the left and his cross found Rooney, who crashed the ball into the roof of the net.  Leverkusen’s objections to the goal were understandable: Valencia clearly impeded the keeper as the ball headed towards him and was, if not guilty of a foul, clearly in an offside position and interfering with play.  It was, however, a goal from a United team who were already controlling the game.   With Fellaini and Carrick looking as if they’d played together for years, breaking up the opposition’s rare forays forward and giving United a balance across the park that secured the bulk of possession.  If elsewhere on the field the Reds lacked a cutting edge, concerns of this nature were dispelled whenever a Wayne Rooney received the ball. 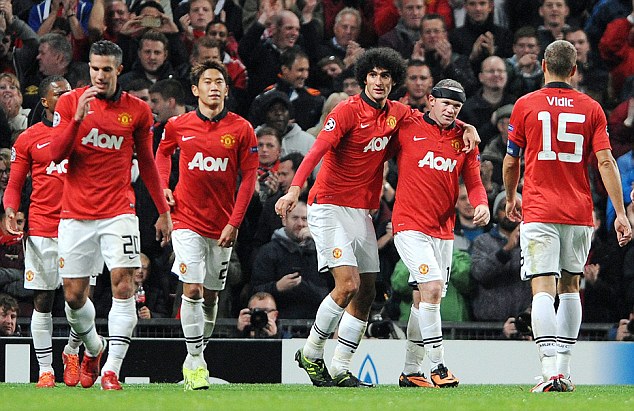 Whether his current form is related to a desire to prove himself to David Moyes or prepare himself for a future shop window it’s hard to say, but he’s reviving memories of the Rooney of five years ago and I like it.  Perhaps his over-eagerness was to blame, however, for United losing their lead.  Rooney passed up a golden opportunity after 52 minutes when he attempted to score from a narrow angle when an easy ball to Van Persie would have left him the Dutchman a tap-in.  Within ninety seconds Leverkusen were level, with Son’s tenacious work setting up Rolfes, who scored with a deflected shot.

It wasn’t long, however, before the lead was restored when Van Persie met Valencia’s cross with a stunning volley and from there United began to play with a fluency that’s often been missing in home European performances in recent seasons.  Rooney more than compensated for his earlier profligacy when he exploited aerial confusion in the Leverkusen defence  to steer a powerful shot inside the near post to grab his 200th goal for United, while his unselfish play came into its own when he picked up a ball from Young to play in Valencia with a perfectly timed ball that was convincingly struck home by the Ecuadorian winger, whose second half performance was something United fans will be eager to see him repeat on a more regular basis this season.

Levekusen pulled one back late on but the only real cause for concern it raised was how poorly De Gea handled the corner that led to the goal, which may give the occasional Red a bad dream and have some of the anti-De Gea hacks sharpening their pencils again.  Otherwise, this was a good all-round performance from United, balanced and controlled with some second-half football that was at times very pleasing on the eye.   David Moyes will face more difficult obstacles than this in the Champions League this season, but he’ll no doubt be very satisfied with a job well done and a performance from United that showed a confidence and fluency that’s often been missing in recent games.

The Netherland’s number one keeper will not be joining Manchester United in this transfer window. Jasper Cillessen’s staying with Ajax and not moving to Old Trafford. Despite the speculation here in the UK, Cillessen claims […]