David Moyes ahead of the game with his former club: “I’m not an emotional person and, in truth, I’d rather just get on with the game. The job is to keep going, keep winning and keep on a good run of form.”

Manager Roberto Martinez: “Old Trafford is a difficult place to play your football, and I think that’s what we’re really looking forward to – to being ourselves and competing against the champions.”

The 42-year-old official has taken charge of 9 Premier League matches this season, brandishing 25 yellow cards and awarding 3 penalties. He has yet to send a player off. Was last seen by United fans for the 0-0 home draw with Chelsea in the second game of this season. 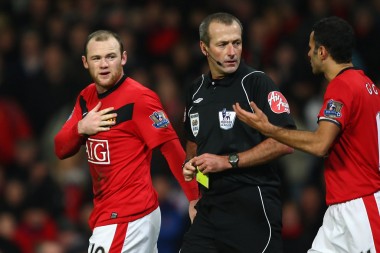 Should he feature, Ashley Young will make a 50th league appearance for Manchester United.

Wayne Rooney is one goal away from having scored 150th league goals for Manchester United.

United have won 16 of 21 Premier League encounters with Everton at Old Trafford.

United have scored more goals against Everton (84) than against any other Premier League side.

Everton have allowed fewer shots on target against them away from home than any other league side this season (16).

Wayne Rooney has been directly involved in 59% of United’s league goals this season – 8 goals, 5 assists.

Romelu Lukaku is one of three players to have scored a Premier League hat-trick against Manchester United (along with Dirk Kuyt and David Bentley).

Everton have dropped 7 points from winning positions this season – the joint-highest number in the division.

I`m very happy that RVP is back united i stand everton jst get ready 4war.

Go fellaini, i wait your goal !!

prediction lineup: (this prediciton lineup is mostly my wishlist)

with Kagawa behind striker which Rooney/Persie, this is his true position. and we need domination players from the right & left side, which is my choice are Januzaj, Nani or Zaha. they could use theirs individual skill to deep attacking.

Cmon United,whoop Everton,no excuses now.They are a good team,this should be a test to see where you are at player wise.