Given the tricky nature of United’s early fixtures, my own feeling was that 11 points from the first five games would represent a decent start to the season.  Sadly, defeat at Anfield now makes that an impossible objective.  Liverpool won with a goal after only four minutes against a ragged, nervy United who only sporadically threatened an equaliser and were far too often prone to misplaced passes and unforced losses of possession.

Let’s be frank first of all and admit that this Liverpool team is a much better outfit than the one that spluttered its way through last season, though certainly not as good as we made them look.  Rodgers has got rid of some seriously dead wood bequeathed him by his vastly overrated predecessor and the team he put out today looked, from the first minute, energetic, organised and not without a killer punch.  They demonstrated this within the first four minutes where a combination of Liverpool’s pressing and Ashley Young’s dwelling on the ball at the edge of his own area led to a corner from which Sturridge nodded home from a few yards. 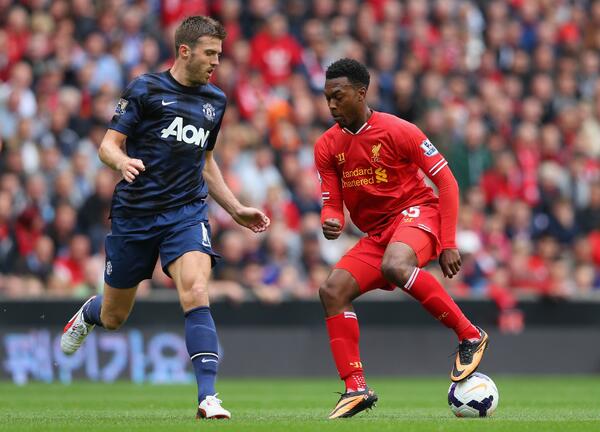 We can point to Ferdinand’s failure to challenge Agger’s first header in the area but the wider concern was how United’s uncertain play in our own half led to the corner in the first place.  It was representative of United’s performance overall and certainly in the first forty-five minutes, where ponderous play at the back allowed Liverpool to push on and influence too many rushed clearances and hasty, misjudged passes.  When United got into the opposition half, too often the play was rushed and erratic, only Giggs showing any real composure on the ball in a midfield where otherwise Liverpool were first to every ball and Carrick was never permitted the space to influence proceedings.

While United enjoyed more possession in the second half, only rarely did we threaten Liverpool’s defence.  Van Persie looked strangely out of sorts and, even when the service to him improved after the break, the intelligent movement that can normally find and create gaps in the tightest defensive set-ups just wasn’t there.  Too often we resorted to shots from outside the area with only one, a fierce effort from Nani, who came on as a second half substitute for the once again ineffective Young, forcing a genuine save out of Mignolet.  Chicharito came on as a late sub and provided some spark up front and it was his pass that put Van Persie through just a few minutes from time.  So often deadly in those situations, RVP failed to hit the target, his skewed shot going tamely wide of the near post.

Inevitably, the hype surrounding Liverpool so far this season will hail this as further evidence of an Anfield resurgence.  They’ll be over-stating the case, as usual, but what can legimitately be said is they kept their shape and composure, stuck to a game-plan and ultimately deserved their win.  A better United would at least have got something out of this game, though, and the concern – ahead of what may well be the most frenetic transfer deadline day in recent history – will once again turn to how United failed for so much of this encounter failed to control the midfield against well-organised but hardly top class opposition.

What did you think of United’s performance? Comment in the section below.

It wasn’t a good performance today and the team struggled in midfield quite badly today. I thought we played quite boring and negatively, and never created any real chances. It wasn’t just today either, I thought we badly lacked creativity against Chelsea. As for Moyes, he isn’t stamping his own mark and is showing too much respect, especially to Giggs.

Moyes is not the one, too defensive, hates flair. Get rid before we slide to mid table

Can anyone clear up the off-side rules please. When Liverpool score, Sturridge is stood behind goal-line as corner comes in, then as ball is headed goalbound he comes into an on-side position to score. He passed two Utd players who were about a yard from the line. Surely that as got to be off-side!

I made up my mind before the game that if a 40 year old played today I would not watch it and I was true to my word.
I have seen the other three. Games he has played in and in all of them games he did not cover as much ground as any one of his team mates in one game except maybe DeGea
I just can Minot understand what Anderson and Kagawa have done to Moyes
But this squad are crying out for some ody different.
Come on Moyes get your finger out and buy someone. You have had 3 months since you knew the job was yours and should do better.

It would be the same after three years he is a planker, his record at Everton speaks for its self. We got three good points today fair and square great game

Wonder when Phil Neville will decide he wants a game. He’ll have a job wrestling that shirt off giggs though. Maybe we can drop van persie and play them both.

The midfield area is the key for us and exquisite creativity is the key for me. We need a lock picker and perhaps we already have him in Kagawa, but not quite sure what’s going on with him at the moment. The Fabregas type player was the type of player I would like to see, but unfortunately that looks off the radar. Otherwise we were poor today, but there is hardly need for blind panic I mean it’s the same squad that won the league by a landslide last season + Zaha. Socks need pulling up I admit, but I’m hardly on the phone to the Samaritans at the moment.

moyes still think that he’s everton’s manager..
the united’s DNA is not in his blood yet..

A disappointing performance all round. 5 points dropped in a week against Chelsea and Liverpool and not a goal scored, nor hardly any chances created.

Last season RVP’s goals masked the problem of the lack of attacking and playmaking quality in midfield.

A midfield of Giggs, Carrick, Cleverly and Young is about as uninspiring a choice as is possible. How Kagawa is left out especially with Rooney missing, beggars my belief. He has plenty of class.

Moyes is conservative and his team selection is becoming predictable. It was disappointing not to see any of Zaha, Januzaj or Lingard on the bench. Don’t think playing at Anfield would have unnerved any of them and each is quite capable of making an impact, and perhaps nicking a goal.

Apart from the Citeh game there are a few relatively easier fixtures coming up and hopefully we will get into the groove then. It will be interesting to see how Moyes goes about the Champions League games.