Marouane Fellaini will complete his transfer from Everton to Manchester United on Monday as the transfer window comes to a close, according to Sport Werald.

Fellaini played 90-minutes for Everton on Saturday in a 0-0 draw with Cardiff City, which is to be his final performance for the toffees before being re-united with David Moyes at Manchester United. 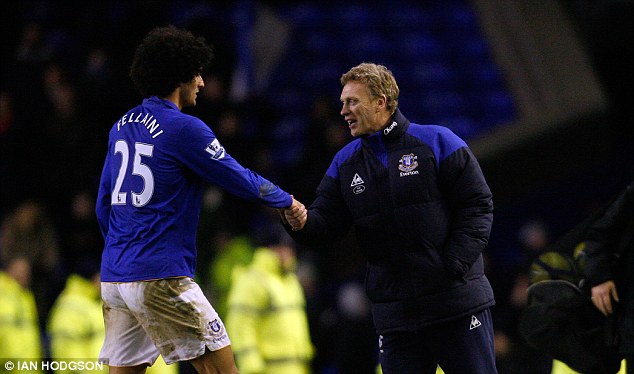 The transfer fee that both Roberto Martinez and Bill Kenwright at Everton have agreed is in the region of £23.5million

Manchester United have had a very mixed transfer window thus far, with failed bids and interest for Thiago Alcantara, Cesc Fabregas, De Rossi and Ander Herrara all turned down.

Both David Moyes and CEO Ed Woodward are continuing to work hard on bringing in players to strengthen the depth of the squad, pointing out that central midfield is the main area in which we need to strengthen.

Fellaini is hoped not to be the only signing coming into Old Trafford before the transfer window shuts at 11pm BST on Monday night, the club still hope that an agreement can be made to buy Leighton Baines too, with current reserve left-back Alexander Buttner going on loan to Celtic.

“I don’t know how busy it’s going to be but it’s a busy football market, it might be busy in the next few days and I hope we do a little bit of business but I couldn’t guarantee that.”

Fellaini will be a great addition to the squad, especially in midfield alongside Michael Carrick. To many, this draws a close on the saga that has been between Manchester United and Everton all summer, with no doubt that Marouane Fellaini will look forward to the challenge of the Premier League title and Champions League football.

The transfer is subject to finalised fees and add-ons being agreed and a medical which will take place at the AoN training centre and Bridgewater Hospital on Monday.

Do you think Marouane Fellaini is a good signing for Manchester United? Comment in the section below.

Actually is a gud buy but it will be better off if we sign herera along.nd also d idea of buying a left back Is not innovative as we have butner nd fabio,both are gud players why loan the former

Wow, did anyone else struggle to read that?!!?!

he’s good player and right man for united this season come united, complete the deal before deadline on monday night….

Good signing no doubt,would have also preferred the additions of the Real Madrid duo of Ozil and DiMaria.

MOYES Fellaini is of best player who has no dubt at all.Well done Moyes for that good signing.So plz make sure u sign more b4 de end of transfer period.

WEL IS A GOOD SIGNING BUT MORE IS NEEDED

it will be good signing moyes fellaini big power house up the sandy row f.c.

i think we got a strong squad already…….they all know wat it takes to be champions!……….we dont need new signings at all…lets improve the squad avalilable

He played in midfield against Cardiff yesterday and was the worst player on the pitch. He is most effective when played as a second striker. We have enough of those already

couldn’t agree more. i won’t believe anything until i see a picture of fellaini in a united shirt because how this transfer window has been so far but this might be more important than signing the likes of cesc and thiago. like u said, we have shinji to fill the creative role.

Well done but we need more

Well,fellani is a good signing but moyes should have make ander herrera the better signing and give shinji kagawa some playing time to express himself cos he is so good!

Only good for long ball game 🙁

Fellaini is an excellent signing..we dont need baines when we already have evra and buttner..

moyes u need to look upon shinji kagawa tht lad need to get more playing time. He is the best when he play next to striker n creates well for others. If u don’t play him he will go back to dortmund n u will feel shit later. So wake up moyes.

Buttner ain’t going to Celtic on loan because the Scottish transfer window shut on Saturday. It seems he could be going to Sunderland on loan instead. I wouldn’t mind that. Danny rose was there last season from spurs and now he’s spurs 1st choice.

I think it’ll be a good buy. I think his height and strength gives us another dimension, ESP against teams who get in your face. Our current midfield doesn’t really have a ‘hard man’ unless Jones comes in and gets stuck in. Also will come in handy from corners!

Still need a creative/box to box midfielder. I don’t think de Rossi will come, think that was an alternative to Fellani. Would like to see oil but I think it may be Herrera (on the bench today against Real Madrid)

Well Shinji is not even on the bench today

And of course Young causes us to concede the corner that led to the goal.

Definiteiy a good addition to tha squad, atleast the midfield will be strengthened, coz we’ve got weaklings, we also need one more.

A gwd one .. Well done Moyes ba mo is nided

Fellaini is a powerful Middle fielder indeed, Man U is signing a good player and he will bring back the Barclays Premiership .

Manchester United have an ACE in Nani, please give this player the opportunity and Man U will be the best in the Barclays gain. Also Hernandez is a great forward for Man U.

Young and Anderon should be loaned out to regain their confidence. Evra is brilliant.

Fellaini is a good addition as he can provide the united midfield with power and tenacity, which is something we have lacked for a long time. I hope moyes is able to bring a more creative cm like Herrera aswell to add more depth to the midfield as the likes of Anderson and cleverly are painfully average. I also don’t understand why giggs is still starting big matches. The man’s a legend but it is obvious that time has caught up with him and he should have retired a couple of years ago tbh. Moyes play the likes of Kagawa, zaha and januzaj instead.

[…] Marouane Fellaini will complete his transfer from Everton to Manchester United on Monday as the transfer window comes to a close, according to Sport Werald. Fellaini played 90-minutes for Everton on Saturday in a 0-0 draw with Cardiff City, which … Continue reading […]

Can’t wait for Fellaini to join the lads.

In the absent of what we are looking for, he can be manage otherwise Herera or Ozil should have being better. Nevertheless Moyes should offload players like Anderson, Young, Nani, and couple of them to enable him allow space for the new comers otherwise they wouldn’t come as there is no space for them

I think Fellaini will be a good signing,he will shore up that midfield and add strength to it which frankly has been missing for a few years now.I still think we need another midfielder who can be the playmaker.I for one will be happy to see Fellaini sign.

I think that he is a great signing for Man U. For £23m we would be delighted to get rid of him. He plays well for about five matches each season. The rest of the time he drifts in and out of the game and is not interested. So I can certainly say SELL SELL SELL.

Yeah!can’t wait to see him in a red shirt.

Not a united material! Moyes should go he has no authority in that team,young,welbeck,cleverly,Giggs Valencia .ferdinard,should not be starting..this season will finish 6th if moyes has no plans for zaha loan him out to get experience for next year.i doubt if moyes will last by January ??? And why is that united have done commercial deals more than spending on players???

I would have to say that it will be an improvement on using Giggs,the man is slowing up and the same with Ferdinand.there are also players in the squad who just arnt going to improve that get used and then others that can get better but hardly ever get a game,so with Fellaini things cant get any worse.

please boss, you have to give kagawa more minutes..

Great signing, Idiots will stay idiots… Sign no players they complain, sign someone good they still complain (bored face), who was Carrick when he joined from Spurs? And we’ve been looking for a great defensive option like him since Vidic’s knee is made of bubblegum and Rio lost his pace… Besides it’s not like the money is coming from your bank accounts so chill haters.