David Moyes has pleaded with Everton to let Leighton Baines and Fellaini join Manchester United for the good of their footballing careers, according to the Daily Mail. 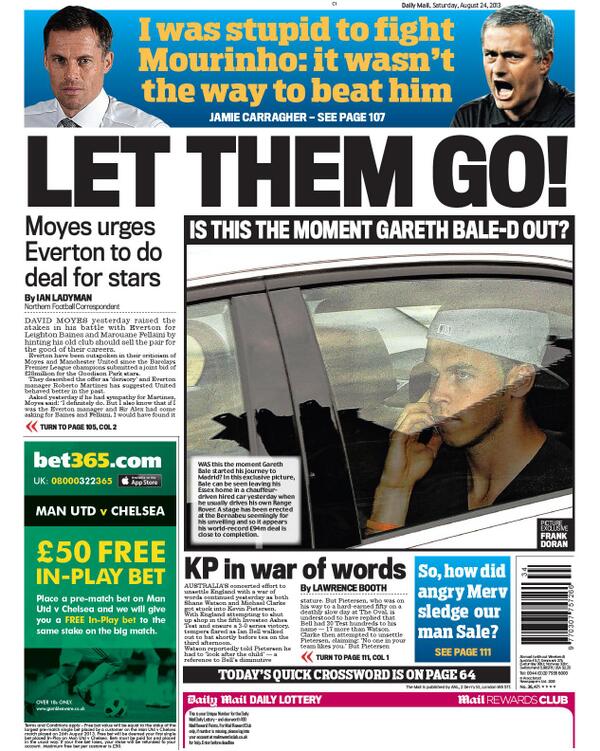 The Daily Mail claim that Moyes, on Friday, had pleaded with Everton to accept Manchester United’s next bid for Marouane Fellaini and Leighton Baines for the good of their football futures, especially with the world cup next year.

Everton manager, Martinez has already criticized United’s pursuit of Fellaini and Baines, insisting it is at odds with how they once did business.

Manchester United made an opening offer of £28millionfor the pair just 48-hours before the start of the season, this left Martinez and Everton fuming, turning down the bid with immediate effect.

“Maybe it sounds a bit repetitive, but we do not want any bids and we are not inviting any bids.

Words that maybe sounding on deaf ears as Moyes has now reportedly pleaded with Everton to let them leave.

Manchester United are said to be planning a raised bid of £35million for both Fellaini and Baines that will be lodged next week, after the Chelsea game on Monday night.

Haven’t United just sent a letter to Chelsea asking them not to bid for Rooney again? Everton have done the same and he’s like a f***in stalker!!!

You lot can f**k off, Moyes you horrible Gollum dog. Treating us with disrespect.

Moyes should pay the asking price for the good of their careers!the two faced ginger tit.

Fancy trying to sign players from your former club eh?

Brilliant business from Martinez getting Robles, Kone and Alcaraz by the way, where did he get them from again?

1 from Wigan , 1 was a free agent, and the other from Atletico Madrid (Robles was on loan and his loan expired) before making yourself look like an Idiot lear to read everything first!!

We paid the money Wigan wanted you dullard.

Robles signed from Atletico Madrid, Alcaraz was on a free transfer and Kone had a release clause activated which Wigan could do nothing about. Exactly how does this equate to a former manager pleading to let former charges leave at a lower price than their market value, you blert.

good point jeff….maybe everton should put in a bid for Rooney…mmm lets see 15 million should do it! In fact I would go as far as saying RVP and Rooney for 30 million. Watch Moyes blow!

Ahahahahahaha, check your facts before you post clueless muppet.

well you tell us! because it seems you think they all came from Wigan you t*t

But we payed what wigan wanted for Kone. Robles wasnt from wigan (your clueless), and Alcaraz was on a free. what Moyes is doing would be liking Martinez offering 3 million for Kone. All managers go back, (rodgers gave swansea the 15 mil they wanted for allen) to their own clubs but they do it in a respectful way and pay a fair price. 28 mil is an insult. The dirty Mancs gave been told no more bids so go away and take your second class manager with you.

For the good of THEIR careers, who does he think he is trying to kid ? He means for HIS career and Manchester United football club.
At lease he could be honest, instead of insulting our intelligence.

What utter sh*te they write just to fill the paper . Martinez has said they are not for sale,oh and Moyes has said Rooney is not for sale=same difference and by the way Ronaldo was not for sale. But EVERY player has his price ……I think

LMAO for the good of their career? are you telling me that the whole time he was the manager at Everton he was looking to sell both of these players for the good of their careers, were they better than what he felt his team was, or was this the same guy who was quoted as saying he wanted to keep both players and build his team around them. My letter to Moyes if I was writing it

Dear Mr Moyes, having read how you have told Chelsea to stop bidding on one of your top players , I would like to inform you of our decision here at Goodison, You can take your jumped up little scots ar*e and waggle it in front of a lions face because even if either of our players were to ask for a transfer to your club we would rather stick a hot poker in our eye and as for the said players if they do ask for a transfer it will be refused , what are they going to do refuse to play unless they get a transfer? I think not IT’S A WORLD CUP YEAR AND THEY BOTH WANT TO PLAY FOR THEIR RESPECTIVE COUNTRIES, NUMPTY!!!

The words of a desperate man who is rapidly finding out that he is badly and embarrassingly out of his depth. Oh, and he’s a mingebag.

He couldn’t try that with Barcelona for Fabregas, so he clearly is trying to unsettle the club just so he can get what he wants. It also shows that he’s not willing to meet Everton’s demands if this is true, so it’s doesn’t sound like it’s all Ed Woodward’s fault.

I thought he’d show a bit more respect to Everton considering he managed them for eleven years, but he’s taking advantage of his knowledge of the club and trying to pinch them on the cheap. I seriously don’t care if they want to play for United, we’re not competing in the Premier League every year just to develop players for other clubs, so Everton shouldn’t be forced to sell unless it’s profitable for them. And if Kenwright does give in to this tactic, he’ll look like he has no backbone. He should really be telling United to fuck off at this point.

Jeff get your facts right…Robles was signed from Atlético Madrid, following a loan to Wigan. Alcaraz was out of contract, making him a free agent and we paid the asking price for Kone – no dodgy, underpriced dealing there then!

Pay the asking price if you want them you cheap turd. Otherwise SOD OFF!!

If I was a Utd fan I’d be utterly embarrassed by the conduct of this trophyless clown. Everyone in the world knows that Fellaini and Baines are worth more than £28m. For Moyes to claim he would have accepted such an offer for the pair if he was Everton manager makes him a massive massive massive liar. I’m ashamed for him. For him to show such utter disrespect to a club and set of fans who supported him for 11 LONG years through decent times and bad, and to repay them in this manner is shocking. He knows Baines and Fellaini aren’t going to hand in transfer requests so he’s deliberately trying to upset them to do so.

If sir Alex asked me….. Get out out that whiskey nose c**ts a**e you f’in ginger pr**k!! Remember where you came from you f****n c**t! You’re gonna need an armed guard when you come back to goodison you disrespectful horrible b****rd!!

this is perfect……..when everton play man utd, this is what the everton team needs to rally them…….Wouldn’t it be funny if Baines and Fellaine score against Man Utd.

So, Moyes, who claims he’s under no pressure to sign players, has pleaded with Everton to let him sign players. He’s all over the place.

Coming back to Goodison with your head held high are you.
I don’t think so ginger b****ocks.
Your going to be visiting hell,good luck with that NOT

im neither an everton or united fan but for all he has done for everton he needs more respect than that jeeeezz calm down and believe me he wont get a bad reception!

I wouldn’t bet on that
He is out of his depth and he knows it
No more hiding behind purse strings for Big Eyes now ,it is down to him and let us all see what he can do
I think he will be out by Xmas
Don’t hope it , just hope he never comes back to the Blues

“he wont get a bad reception!” hahaha you don’t know goodison and the everton fans. We did more for Moyes than he did for us. Plucked him from the championship and gave him a premier league job. Encountered 11 winless years . Yes he did well for us in general but now he can go and sit and spin

You will never be up to this job…the begging only proves that.

You are a 2 faced money chasing fraud.