Manchester United beat Swansea City 4-1 on Saturday at the Liberty Stadium with Wayne Rooney coming on as a second half substitute.

After Robin van Persie scored Manchester United’s third goal to almost secure all three-points for the reigning champions, all but one of his team-mates celebrated his goal.

Below you can see, a picture taken from the away end at the Liberty Stadium, Manchester United celebrating all but one casualty. Wayne Rooney did not celebrate either goal that was scored while he was on the pitch with his team-mates. 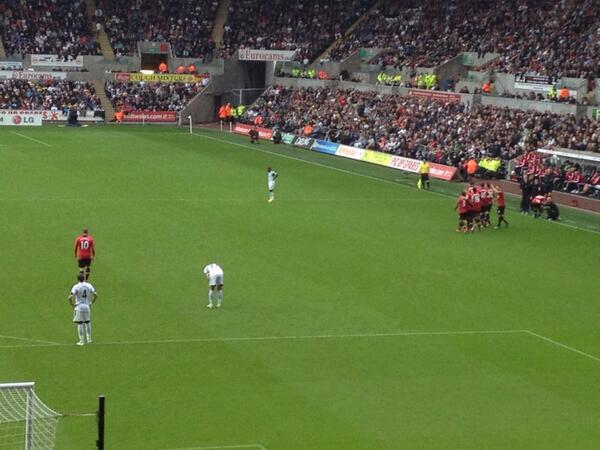 Do you think Wayne Rooney will still be a Manchester United player at the end of the transfer window?

14 replies on “PICTURE: Wayne Rooney the outcast at Manchester United?”

Get him out of this club (but not to chelsea)

let him go already… he obviously want out.

If v think practically….. rooney will be good for united in the long run. But if his tantrums dont dry down then kick him out of the priemere league n definately not to chelsea.

Rooney is still a great player just look @ his assist bt he wasnt happy Y? pls rooney calm down we still need celebrate with us plsss

Ya fairly sure this is after the fourth goal where Rooney was tackled making the assist , chances are he was just injured and not being ostracized by his team-mates but as with all transfer sagas something is being made out of absolutely nothing , I wouldn’t read too much into it .

Well how would you explain his leaving the pitch af full time when all the lads are out cheering up the fans…i love Wayne….but if he wants out he should leave. Sell him and cash in moyes, but I understand what he’s trying to do..like Jose said to Ronaldo…..as long as your scoring goals for me..,I don’t care if your unhappy at the club…same should ho with wazza

This picture was taken after the RVP third goal and not the fourth (when Rooney did get a knock).

He clearly is unhappy so I don’t think “something is being made out of absolutely nothing”.

If Rooney is an ‘outcast’, it is all self-inflicted. Sell him to Arsenal, the incredible (200k+ p.w.) sulk.

He was tackled hard. You could see it on camera he was in some pain after the goal.

you are still good. I love you roooooooooney good boy

Like ive said before i wouldn’t sell its just like when your kids keep asking for a new bike? they sulk. Have a strop drag there heels but at end of the day if you dont give in they soon get over and carry on as normal. And its the same with Rooney the club need to dig there heels in hea got 2 years left on his contract which he was happy to sign to get the big wages. Well as far as in co cerned i would tell him straight. Wayne its like this you aintgoing no where we aint selling you theres a world cup next year and if u want to give your country a chance in it u better knuckle down but as far as in concerned u can rot in the reserves before i ever sign you over to Chelsea no matter whether u hand in a written request or not ove got you for 2 years and that’s it no get out my office and stop makeo g a twat of yourself

I agree with the sentiment of your post but for me the galling thing is, Rooney is not a kid, he’s a 27 year old millionaire footballer living the dream.

He needs to lift his head and look at the sunshine in his life. He is one lucky young man.

Why not sell him to Chelsea. Arsenal sold robin to you guys. and no one was making a big fuss about it knowing it would only strengthen manu