Cristiano Ronaldo returning to Manchester United has been the rumoured story from all media outlets over the summer, but yesterday Ronaldo dropped the biggest hint that he is to stay in Spain with Real Madrid.

Ronaldo made a surprise visit to Crest Secondary in Singapore on Wednesday afternoon for a Q+A and also to show off his footballing skills in front of 200 very happy children.

During the 30-minute session, he told youngsters how he turned into the world’s most expensive footballer and to answer various questions about his career on stage, even showing off with a few tricks in the process.

Cristiano Ronaldo was accompanied by his girlfriend, Russian model Irina Shayk, and Singaporean billionaire Peter Lim who was also at the Crest Secondary school.

The following quotes from Ronaldo’s visit to Singapore are from Today Online.

Most of the students wanted to ask him:

“Why are you so good at football.” 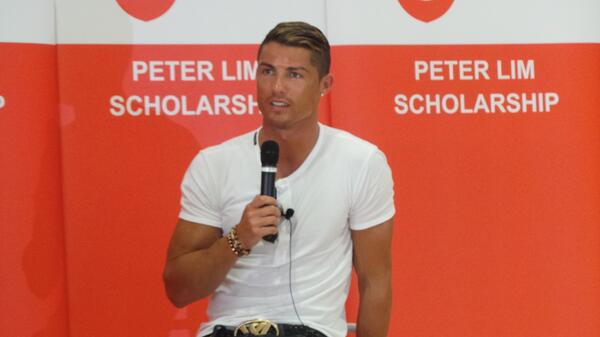 The reply from Ronaldo was simple:

“I train hard, if you want to be the best, you’ve got to train like the best.

“Believe in yourself and don’t be afraid of anything”

As more questions came in from students, the topic soon moved to his Manchester United days in which Ronaldo replied:

“I really miss my time in England and Manchester United, but I’m very happy at Spain and Real Madrid.”

11 replies on “Cristiano Ronaldo: I miss Manchester United but happy at Real Madrid”

I want cr7 2 come back home

That comment for me says he’s retiring at Madrid. He’s using Utd as a pawn to get the contract he wants.

Cr7 hv no intention of returning to united.

I MISS MNA UTD, but am happy with RM!! he just said that to impress Real but deep down his heart he really wants to come back home.

ah i think you are right man

It would be great to see him at United again
Please come home Ronaldo !!

He was never going to come back to Utd, he had six great years with Utd and won all there was to win. He had stated on numerous occassions that it was his boyhood dream to play for Madrid and that is where he is now. All the speculation is just leverage to get more money for himself and his agent and nothing more.