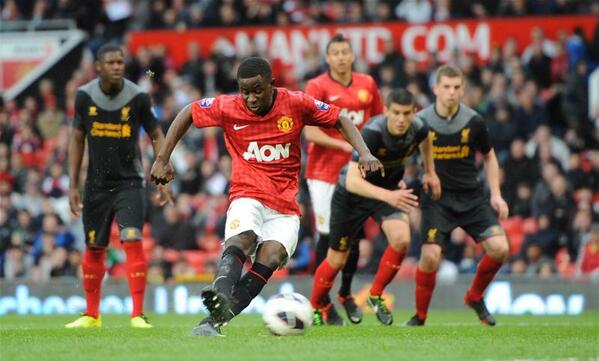 The reds made easy work of their rivals in a heated affair in which Liverpool’s Flanagan was sent off in the second half, all be it harshly for kicking the ball at Adnan Januzaj after being bought down by Conor Coady.

Manchester United have now secured a place in the final of the Barclays Under-21 Premier League, which will take place next Monday evening (7pm kick-off) against Tottenham Hotspur at Old Trafford.

2 replies on “PICTURE: Larnell Cole bags a hat-trick against Liverpool”

[…] youngsters beat Liverpool 3-0 in Tuesday night’s play-off, semi-final at Old Trafford with Larnell Cole scoring a hat-trick in front of 3,000 […]

[…] youngsters beat Liverpool 3-0 in semi-final at Old Trafford with Larnell Cole scoring a hat-trick in front of 3,000 […]