Fergie has big day coming up

He’s probably the greatest football manager to have ever entered a dugout in the past two decades, but April 6 will see Manchester United boss Sir Alex Ferguson’s attention divided between TWO huge sporting events. Sir Alex not only has a massive Manchester derby with rivals City to focus on, as he’s got an interest in the Grand National at Aintree!

An avid fan of horseracing, Fergie has been involved in ownership of racehorses for well over a decade and can often be seen at some of the biggest meetings on the horse racing calendar including the National, but this year he’s got a little extra interest.

Harry the Viking will run the Grand National for Fergie, who owns a share in the horse, and is seen as having an outsider’s chance of winning the big race. Should Harry the Viking pull off an unexpected win, it could mean double success for Sir Alex, as his side look like regaining the Premier League title from City.

Having his hand in more than just one sport will increase his chances of adding yet more silverware to his trophy room, but it’s likely that Sir Alex will be more interested in his day job, focusing firmly on the Manchester derby. At the time of writing, his side currently have a 12-point lead at the top of the Premier League table, which with 11 games to go seems unassailable.

Despite their impressive lead, Fergie won’t take it for granted just yet, as City were behind their great rivals coming into the last few games before snatching the title on a dramatic final day of the season. The form book suggests that United will win the game at Old Trafford, helped by home advantage and a sense of cohesion.

However, there is a possibility that fixture congestion could see their lead whittled away by City. They have a big game coming up in the Champions League against Real Madrid, while possible injuries to key men like Robin van Persie could derail their progress. 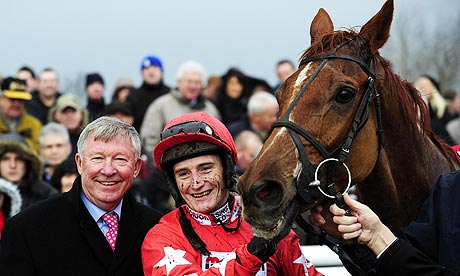