“If we are top of the league on New Year’s Day we know fine well, and so does everyone else, that we are going to be in the ball park at the end of the season.”

Manchester United enter the festive period six points clear (possibly three by the time you read this) of neighbours Manchester City. With three games in the space of seven frantic wintry days (rain not snow), Sir Alex Ferguson will use the full depth of the first team squad, rotating as and when fatigue tickles or niggles bite. With three relatively kind (on the face of it) fixtures, there’s every chance United will enter 2013 at the top of the table. Fergie himself said this week, “I am looking at December as an opportunity to gather points and make sure we are top of the league come New Year’s Day.” With a potential nine points up for grabs over the Christmas week, this time of year really is a chance to cement your position at the top.

First up is a difficult trip to the far-side of Wales and the Liberty Stadium, where Swansea lie in wait. United then travel back North to see out 2012 with two home fixtures against Alan Pardew’s Newcastle United and high-flying West Bromwich Albion.

Nani and Anderson will miss the festive fixtures. Shinji Kagawa should feature at some point. Rafael misses the trip to Swansea. Nemanja Vidic is fit again. Fergie intends to rotate: “It won’t be the same team in any of these games. There will be changes.” 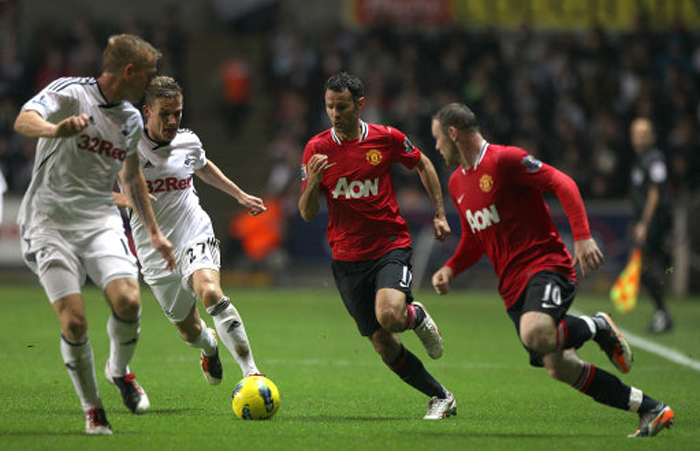 Only two sides (Wigan and Reading) have conceded more goals at home than Swansea this season (14). United (21) have by far the deadliest away attack.

At the Liberty, Swansea have seen 25% of all goals scored between 60′ and 70′. Away from home, United are yet to score in this period.

Javier Hernandez’s winner last season was the first goal United had scored in an away fixture v Swansea since Jack Rowley struck in a 2-2 draw on 16th March, 1938.

Swansea and United are the only two sides to have not dropped a single point from winning positions this season.

Michu and Robin van Persie have both scored 12 league goals, the highest in the division. They have also scored their respective side’s first goal on 6 occasions.

United (28) and Swansea (24) have scored the most goals from open play this season.

Right side bias: At Old Trafford, 39% of United’s attacks are focussed down the right. Away from home, 41% of Swansea’s attacks use the this avenue.

Sir Alex on Swansea: “The important thing for me is that they try to play and have the courage to play their football.”

Midfielder Ki Sung-Yueng on facing United: “Everyone is looking forward to playing them… they are the best team in the league and it’s going to be a very tough game for us.”

Courage on the ball is exactly what United will face when they visit the Liberty Stadium on Sunday. Confident in possession and enjoying a good season (despite two successive defeats) so far, Swansea will provide a stern test. Last week’s defeat by Norwich was only their second at home this season – a record which includes draws with Liverpool and Chelsea.

They should welcome back the impressive Dutch goalkeeper Michel Vorm from injury. Club captain Ashley Williams will be partnered at the back by summer signing Chico who, despite impressing on the whole, looks like he has a mistake or two in him. Should Angel Rangel shake off his own injury, he will start at right-back, with Ben Davies – proving a more than adequate replacement for the long-term injured Neil Taylor – filling the left-side of defence. In midfield, Leon Britton and the summer arrival from Celtic, Ki Sung-Yueng, should fill the middle of the park, with Wayne Routledge and Nathan Dyer on the flanks. Jonathan De Guzman will fill the gap between midfield and their lone attacker, this season’s revelation, Michu. Should Pablo Hernandez be passed fit, expect to see De Guzman drop back and Ki drop out.

The entire Swansea forward line are comfortable on the ball and fluid in movement. Dyer especially will provide Patrice Evra problems down the right flank. The defence will have to be focussed and positionally sound, more so if the tricky Hernandez plays, who likes to pick the ball up and run from deep. If he does, Michael Carrick’s job becomes even more important. Michu, while no longer the surprise quantity he was 8 weeks ago, will be their main threat. He is good in the air, strong, possesses decent pace and a good left foot. He will hold up the ball and allow the pacey midfield players, such as Dyer and Routledge, to buzz in and around him. United will have to pay great attention to these midfield runners who will feed off of Michu’s service. Despite Michu’s strength in the air – as well as the height of Williams and Chico – Swansea have only scored two set-piece goals this season. They are much more dangerous from open play.

For United, as this is the first game of the festive period, as well as arguably the most difficult, do not expect to see too many changes from last week’s win over Sunderland. David de Gea should retain his place in goal, with Rio Ferdinand coming in for Chris Smalling in defence. As long as Jonny Evans shakes off a hamstring complaint, he will start. If he doesn’t, Smalling will partner Rio at the back. With Rafael already ruled out, Phil Jones should start at right-back.

Michael Carrick, midfield linchpin, will start in the centre of midfield. After a fantastic run of form – including another goal last week – Tom Cleverley will hopefully start again alongside him. Ashley Young is enjoying a renaissance in form himself and – with Nathan Dyer likely to be lively on the right-hand side – should start on the left. Young works back well and could be needed to help Patrice Evra nullify the tricky winger’s attacks. He is also, of course, once again providing decent service in attacking situations (assist for RvP last week) so deserves another start. Antonio Valencia should get decent joy down the right wing, with Ben Davies, while performing well, still relatively inexperienced. Should the Valencia of 12 months ago make an overdue appearance, he could prove a match winner.

Needless to say, with their partnership blossoming wonderfully, Wayne Rooney and Robin van Persie should start up top. Rooney, as he has done to great effect this season, should drop back in to make a midfield three if Swansea begin to dominate possession. Leon Britton will attempt to pick up the ball from the back four and control the game – Rooney may also be deployed to stop this from happening. Van Persie should be on his toes to take advantage from any slack play in the Swansea defence, especially, as mentioned above, from Chico.

With Swansea so comfortable on the ball, and likely to play it about willy-nilly should we allow them, a high press, where the United players get tight fast and often, could be an attractive approach. Should we take an early lead, this changes, of course. Then, we can be happy to allow them to play the ball around in the centre of the field, before pinching it and attacking them at pace. With two sides happy to enjoy possession and pass the ball around, moving the opposition across the pitch and probing for holes, it should be an aesthetically pleasing encounter. With United in such fine goalscoring form this season, as well as Swansea’s poor home defensive record (as well as United shipping goals for fun on the road, of course), I do not expect to see a repeat of last season’s tight 1-0 victory.

Away from home, Newcastle average a 76.4% pass success rate, the fifth-lowest in the division. At home, United average 88.7%, the league’s highest.

Newcastle are yet to win a match on their travels this season. Their last away PL victory came on 2nd May, a 2-0 win at Chelsea.

United haven’t seen a player sent off against Newcastle since Roy Keane saw red in 2001.

Demba Ba averages 4.3 shots on goal per game – the second most in the league. Robin van Persie has United’s highest, with 3.5 shot every match.

With 7 wins from 8 home league games, United average 2.62 points per match. On their travels, Newcastle average 0.50.

Newcastle have gained only 3 points from losing positions this season. United have recovered 21.

United are unbeaten at home against West Brom since a 3-5 defeat on 30th December, 1978.

United have trailed at half-time twice, recovering 3 points. West Brom have found themselves behind at half-time on 4 occasions, losing all 4 matches.

Michael Carrick averages 85.3 passes per match, the second highest in the PL. West Brom’s highest in Youssuf Mulumbu with 52.9.

Shane Long and Peter Odemwingie have 9 goals and 7 assists between them. Wayne Rooney and Robin van Persie have 19 goals and 12 assists.

Away from home, West Brom have conceded an average 18 shots on target. Ironically, at Old Trafford, United average 18 attempts on goal per game.

West Brom are yet to score a goal in the first 30 minutes of games away from home. At Old Trafford, United have scored only 6 times in the opening third of matches.