David Moyes – on drawing Bayern Munich in the Champions League quarter finals; “I’ve got us to the quarter-final and now the aim is to get to the semi-final. It’s a tough one but we’re looking forward to it.”

– on Robin Van Persie’s injury; “He won’t be available tomorrow, we’re getting him rescanned today. We’re not quite conclusive on everything we’ve seen yet. So we want to check that out and be sure.”

– on United’s chances against West Ham; “There’s no guarantee that one result leads to another but you’d rather have a good result than a bad one and we got a really good one in midweek so hopefully we can build on it.”

“We can’t drag our heels [in the league] and think about the next round [in the Champions League]. We have to prepare right for the next game, against West Ham, and go and get a result. It was a terrific night against Olympiakos and nice to be on the winning side. We were long overdue a performance like that and we pulled it out of the bag when it was needed, but we also have to prove ourselves and show what we’re capable of in the league as well.” Phil Jones

“We’re in exactly the same place with the squad as we were last week. There’s only Joey O’Brien and Marco Borriello who aren’t available for selection so I’ve got a big strong squad to choose from for Saturday’s game. We have to make sure that when we come off the field on Saturday that we’ve got a point, if not more.” – Sam Allardyce speaking to whufc.com

United are unbeaten against West Ham in the last six meetings between the two (W4 D2), with the last defeat a 4-0 thrashing in the Carling Cup 5th round in November, 2010.

West Ham haven’t gotten the better of United in the Premier League since 29th December 2007, when Anton Ferdinand and Matthew Upson cancelled out Cristiano Ronaldo’s first half opener.

United haven’t conceded a goal in their last three away games.

West Ham come into the game on the back of successive defeats to Everton and Stoke after recording four straight victories in February. 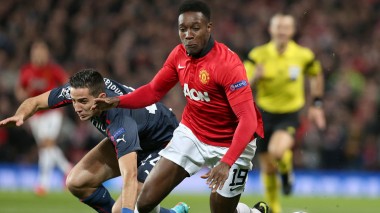 Tactical Insight Into United’s Fiasco In The Manchester Derby

For the second time in as many years, the Manchester Derby turned out to be a one-sided affair, with Manchester City routing their counterparts 4-1. Even though United bounced back from the humiliating defeat by […]

What a difference two weeks makes, eh? A fortnight ago, United were trudging off the Old Trafford pitch having lost their second successive match at home 0-1, this time to Newcastle United. Fast forward to […]

David Moyes & Manchester United have reportedly placed Leighton Baines on the top of their January transfers list, after failing to sign the England international during the summer. The summer transfer window was one to […]