The Reds secured a routine victory over an unimpressive Crystal Palace side via a penalty from Robin Van Persie and a goal from Wayne Rooney in a drab performance from a United side whose play was often laboured and predictable against opposition that shut the door and, in disappointing contrast with Ian Holloway teams in the past, looked distinctly unwilling to come out and play.

In some respects this game could be said to have been the true start of the David Moyes era, with his first major signing Fellaini impressing after coming off the bench and with the introduction of Januzaj showing Moyes’ intention to give the young Belgian opportunities wherever possible this season, as indicated in the manager’s programme notes.  Enthusiasm for both of their performances ought to be tempered by the quality of the opposition and the fact that Palace were also down to ten men by this point, Dikgacoi having been given a straight red for a professional foul on Young that led to United’s first goal just before half-time.

While the Palace player had done his best to add unwelcome tension to the occasion by taking an age to leave the pitch, Van Persie was unfazed and dispatched the ball unfussily into the Palace net.  The goal came six minutes after United had belatedly identified the dodgy hinge on that closed door of a Palace defence.  Before that, we relied too often on long ball out towards Young on the left, who rarely did anything with them and United, while dominant, were far too stale and predictable in the build-up.  It was Rooney who showed the way after 39 minutes, with a sublime pass that found Van Persie between the flat-footed central defenders and from which RVP struck a powerful shot against the crossbar.

It was from a similar position that United secured the lead, Young drifting into a central position to be upended by Dikgacoi with the result that United went into the break with a lead we deserved but had only barely done enough to earn. 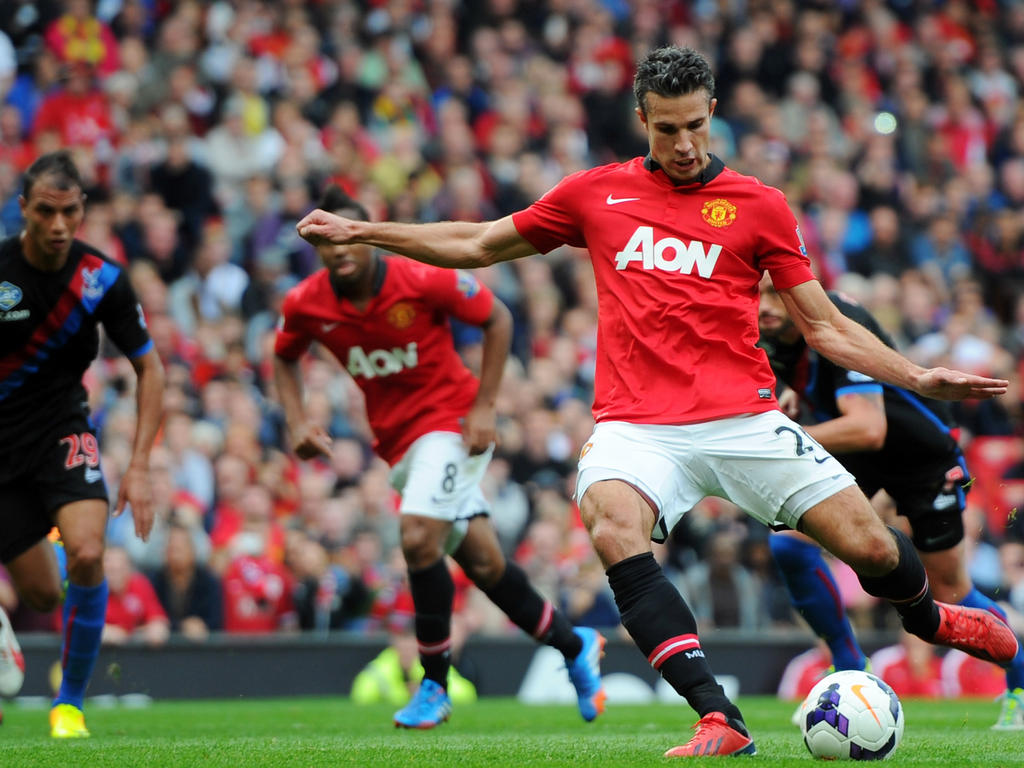 Any thoughts that, against ten man opposition, United would cruise to a big victory were put on hold when the second half began pretty much as sluggishly as the first.  Only when Fellaini arrived to rapturous applause just after half an hour did the Reds step up a gear, but even then poor finishing kept the scoreline down to the two goal margin that was established when Rooney scored placed his free kick, won after intelligent play from Januzaj down the left, just inside Speroni’s near post.

Palace fans sang ‘2-0 to the referee’, with reference not just to the penalty decision – the foul had occurred right on the edge of the box – but also to the far more ridiculous call for a Palace free kick just prior to the foul on Januzaj that led to United’s second.   This ignored the huge call for a penalty that was denied United for what seemed a clear foul on Evra in the first ten minutes.  Palace fans, and their manager, have already regularly resorted this season to claims of poor treatment from officials when their real problems are blindingly obvious: despite the battling qualities, they clearly lack the quality to compete at this level and I’d be surprised if they survived the drop.

For United, Fellaini made a bright start to his United career, falling in alongside Carrick and showing comfort on the ball along with some incisive forward passes and a shot from just outside the box that Speroni scrambled wide.  Januzaj similarly made a promising contribution to the game and their superiority over the players they replaced – Anderson and Young – was undeniable.  With Valencia again struggling for form and an eager Zaha waiting on the bench, there is clearly now a healthy competition for places in vital areas of the field, and surely some tantalising selection options for Moyes to ponder over the next few weeks.

Probably would be best if you looked at a few replays before denying that Man U get preferential treatment from the refs. Man U will be lucky to finish top 6 this season. Unless the refs lend a helping hand.

dirty cheat is young .and how is it a pen when it’s outside the box ??? and howIs it straight red when he’s not the last man ???? a shocking decision for the freekick as well seeing as the same tackle up your end was waved away by the ref ,oh and your home support is shocking ,give me selhurst all day long

What a crock! Young cheated you to a win or is that just the norm so not noticed?

What typically biased & one sided report from a obviously half blind Man U supporter who can only watch a game through red tinted glasses. Unfortunately it is this type of Man U supporter, who by believing that there is only one team who plays football in Englnd, gives all Man U supporters a bad name.
Man U on the day had no answers to a team who came expecting to leave with nothing but we’re prepared to give 100% even when harshly had their ranks depleted by a referee who didn’t have the balls to make the correct decision at Old Trafford. Or maybe he hadn’t heard that Sir Alex had retired!!!
It would have been interesting to see what the result would have been if it had stayed 11 v 11.
Could not believe how quiet the 70,000 plus Man U fans were unless of course they were remembering 16-12-72.

Two things stood out for me.

Palace are a poor side and all the moanings of Ian Holloway and their supporters can’t disguise that fact. They are not a patch on Holloway’s Blackpool side that entertained us a couple of years ago. Relegation appears a certainty.

United desperately need someone in that creative playmaking role (yes, I know it sounds like a broken record). Only when Rooney dropped deeper did United start to create. Prior to that it was long balls from Vidic or Anderson to Young and RVP; half of which failed to arrive. RVP doesn’t thrive on long passes unless they are of the Rooney visionary kind. Young dances and dives his way around the place to little effect. He has probably just won his first and last penalty for the season.

The introduction of Fellaini and Januzaj added a bit of Belgian quality (never thought I’d say that about anything but chocolates). Fellaini will become a cult figure and Januzaj could be anything.

A midfield built from the likes of Kagawa, Fellaini, Carrick, Nani, Januzaj, Zaha (or Rooney) is preferable to one which includes Anderson, Cleverley, Valencia and Young.

How are we a poor side. Blackpool had a one dimensional team all attack minded no point scoring 2 goals and conceding 3. We are a better side. Have more room for squad rotation and very talented ball players. Chamakh looks class. Gayle is adjusting has glimpses of promise took your so called “Champions” defence with ease and narrowly missed. Campan Spain u20 captain (not bad) Ward and Moxey as fullbacks who are both highly rated. Jedinak in the middle of the park who has made more tackles and successful passes then anyone in the league so far this season. A defense that is always defending well even UTD had to cheat and dive about like cunts to win the game. A non-penalty or sending off and a free kick when your player tripped over his own feet. No goal or decent chance from open play. Glad this zaha hype has left us last season was our most talented player but not our best. Huge potential and UTD will fuck him up for a bunch if diving fairies. As for relegation who knows, all I know is our home form will count for a lot (rarely lose at home) passion exists in the ground not like the fake “supporters” you have at your soulless ground for tourists. Lastly have you ever been old Trafford.